The Key to The Walk Down

July 3, 2016
We've got a big Tombstone issue going out the door next week and inside we have one of the best descriptions of what actually happened at the Spicer Hearing I have ever read (hint: it was written by Casey Tefertiller). Since we're dealing with the legend and how the most famous stroll in history became so iconic, Dan The Man is noodling a couple cover approaches: 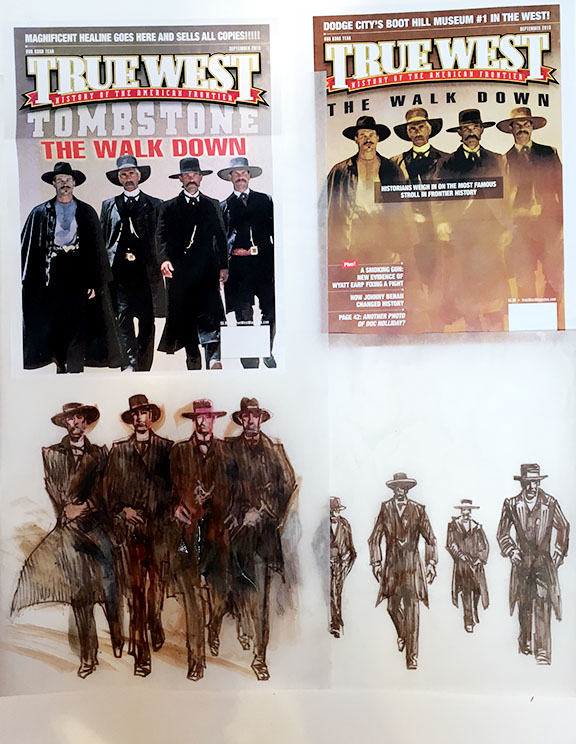 Daily Whip Out: "The Walk Down Sketches"

And I'm doing an artistic version for usage inside to illustrate the various phases of the walk down.

If you truly want to know the genesis of the O.K. Corral fight there are a couple quotes from witnesses that help explain how the fight came off. To me this is the biggest and best insight:


"I was standing at the Post Office with Mr. Dillen of the firm of Dillen and Kenealy. . .I walked down as far as Fly's [rooming house], and there I saw Sheriff Behan and four farmers. As I approached, one of them, Mr. William Clanton, put his hand on his pistol, as if in fear of somebody. When he recognized me he removed his hand."
—William Cuddy

This little snippet of insight into the mental state of the cowboys before the fight shows all too clearly what would happen, for real, several minutes later. Billy Clanton was already agitated, nervous and ready to draw iron at the slightest provocation. He and his pards had been talking about going toe to toe with the Earps for at least an hour, or more. In the case of Ike Clanton, he had been crowing about this for more than 12 hours:

"All I want is four feet of ground to fight on."
—Ike Clanton

Be careful what you wish for. When the moment of confrontation finally came, and as the Earps walked into the vacant lot and Virgil barked "I want your guns," the two cowboys with firearms reacted, right on cue. By the way, I love it that Mr. Cuddy describes the Clantons and McLaurys as "farmers." that kind of takes the starch out of the image, no? Four men walking side by side. They seem to be going somewhere with a purpose, even if it's to join the photographer. In spite of the innocuous setting, the four-man grouping is still compelling. In the case of the Earp's and Holliday, we visualize them shoulder to shoulder, a fighting machine, deadly comrades on a mission.

A  young whipper-snapper looks on, perhaps taking it all in for future generations. Too late. He's long gone now. 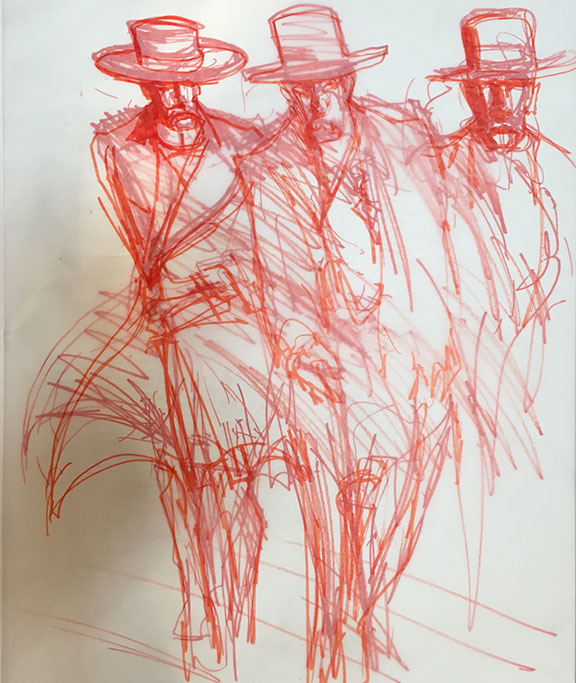 Daily Whip Out: "The Wary Walk Down"

I'm trying to get past the legend, or, in this case—the cliche—and into that head space where the Earp side isn't quite sure what they will encounter. I have always been haunted by what Morgan Earp supposedly asked Wyatt as they started their walk (and couldn't see their adversaries): "What if they are on horseback?" That would change things considerably.

"History is defined by people who don't really understand what they are defining."
—Chuck Klosterman