July 12, 2016
I have been so busy with Mickey Free, Vincent van Gunfighter and The Walk Down I haven't had time to do much of anything else. But now that the latest issue is out the door, I want to return to something I re-discovered last winter when John Langellier and I motored to the Grand Canyon to stay in Buckey O'Neill's cabin. John brought along an audio tape of Mark Twain's "Roughing It" and one of Twain's descriptions kind of floored me:

The Real Pony Express Rider
According to Mark Twain in his classic travelogue "Roughing It," the pony express riders he saw and described were not dressed as we popularly picture them: "The rider's dress was thin, and fitted close; he wore a 'round-about', and a skull-cap, and tucked his pantaloons into his boot-tops like a race-rider. He carried no arms—he carried nothing that was not absolutely necessary, for even the postage on his literary freight was worth five dollars a letter. . .His horse was stripped of all unnecessary weight, too. He wore a little wafer of a racing-saddle and no visible blanket. He wore light shoes, or none at all. The little flat mail-pockets strapped under the rider's thighs would each hold about the bulk of a child's primer."

Isn't that kind of shocking? First of all, what is a "round-about"? So, the actual pony express riders did not wear a big, 'ol cowboy hat—he wore a SKULL CAP!—no boots, no fringe coat, not even a pistol! And not even the so-called custom saddle with the mail packets on the sides? Now, here's our popular idea of how they should look: 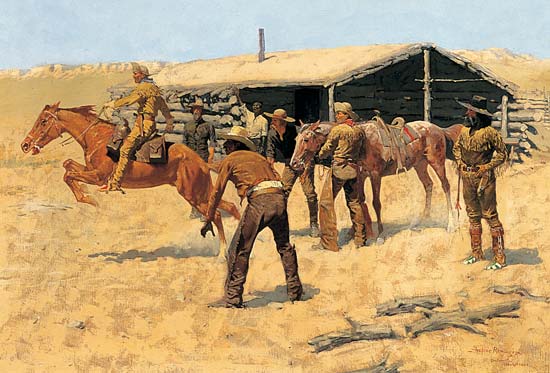 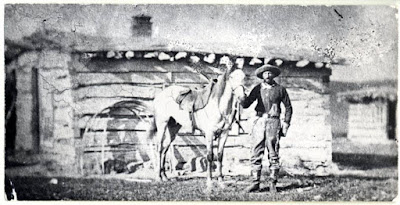 An early photo of an alleged pony express rider

"What people choose to believe is a fact in itself."
—Leon Metz