July 5, 2016
Worked most of Sunday and Monday on an enigma wrapped inside a riddle: what has eight legs, evades capture and refuses to die? 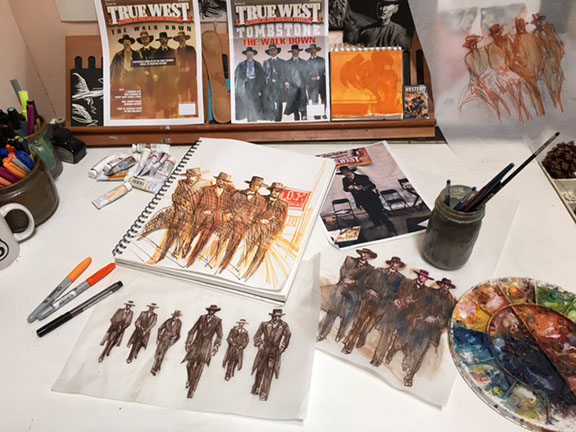 Not sure why this simple scene evades me so. Still, I stumble onwards. Trying to capture the images in my head, never quite getting it on paper. Seems to be a reverse formula: the more I try to capture it, the farther away it goes. I have good reference, I know what I want it to look like, but so far, no go. 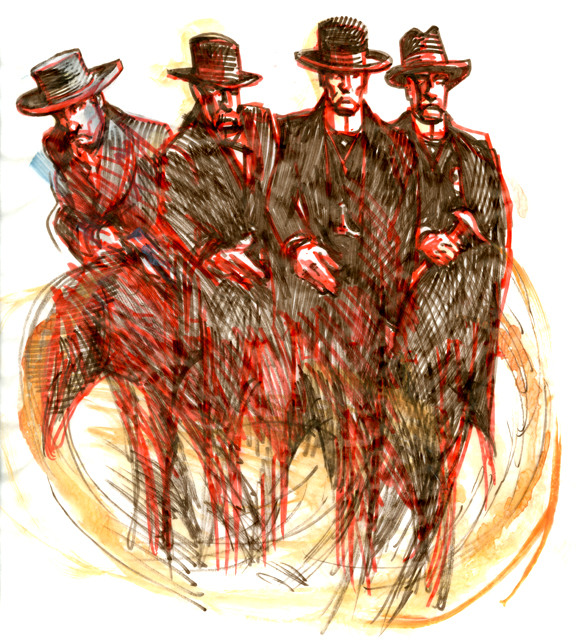 Daily Whip Out: "The Wary Walk Down"

You could also call this the schizophrenic walk down. You have two legit lawmen (Virgil and Wyatt. I know Wyatt claimed Morgan was sometimes deputized but to be fair it's a stretch here), three gamblers and a drunk dentist. The guys on the right are doing their job to confront bad guys and disarm them. The two guys on the left, Doc Holliday and Morgan Earp, well, they are hotheads, itching for a fight. It's been called a misdemeanor arrest gone awry and that is an understatement. I have long maintained if you take Doc Holliday out of the equation there would be no gunfight. Most likely you would have a messy arrest where someone got buffaloed (Frank McLaury and Billy Clanton were the only ones who HADN'T already been buffaloed—hit on the head—by Virgil and Wyatt. Both were pros at taking the startch out of miscreants).

Still not exactly what I was aiming for. Read this over the weekend, which, frankly, I resemble:


"Muddy watercolor. Rickety boats. Smeared sky. San Giorgio maggiore in the background. A view from the Riva degli Schiavoni, probably J.M.W. Turner: black letters in the white margin. Some guy who didn't know when to quit. Looks like he tried to erase it with a wet toothbrush."
—Martin Seay, "The Mirror Thief"