A Never Before Published Photo of Billy the Kid

June 28, 2018
My friend Mundo Con Queso, had a question for me: "Hey, Boze, where exactly was the shooting of Windy Cahill at Bonito, Arizona?"

Evidently, Mundo talked to some guy down at the old McDowell Store who claimed it was in the building.

Well, no it did not happen in the store, but at the Hog Ranch where the Soiled Doves were stationed to service the troops at nearby Camp Grant (later Fort Grant).

I promised Mundo I would go home for lunch and find my Bonito research photos and bring them back to the office and post them for him. So, rather than do a whip out piece of art over lunch I was pouring through the BBB archives and lo and behold I discovered this never-before-published photo of the Kid: 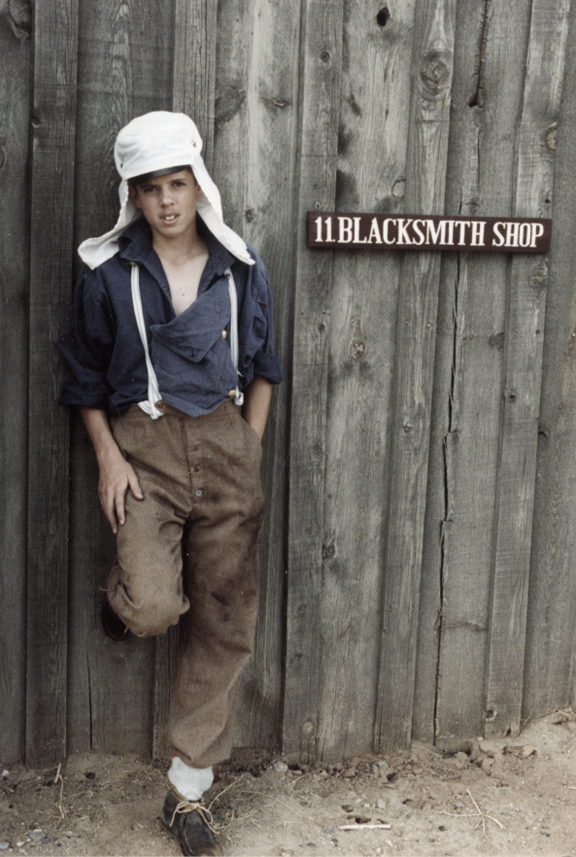 I visited the historic site of the Kid's first killing in 1991 and—sorry about the shorts—here are three photos that tell the tale:

The site of the Kid's first killing at Bonito.

In the top photo is the McDowell store. We are looking south, and the store front faces north towards Fort Grant, which is about a mile away. In the middle photo we are standing where the hog ranch was, looking back west towards the McDowell store, and in the bottom photo we see one of the remaining hog ranch dwellings. The set up looks like this: 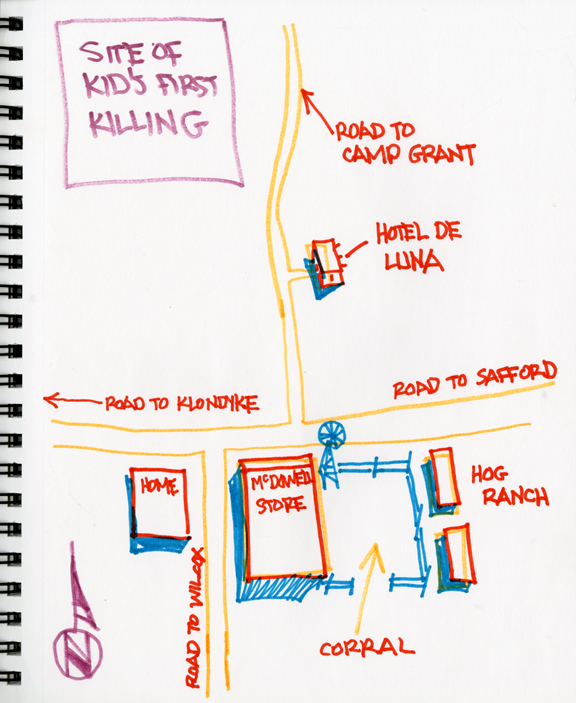 Here is a page from my Billy book showing the Hotel de Luna where the Kid worked as a busboy and was arrested there. The hotel was actually on the military reservation and in violation of the rules for private business near U.S. Military forts.

Back to the never-before-published-photo of Billy. This is actually a young re-enactor out at Pioneer Living History Museum when I was out there in 1991 shooting reference photos. I was struck with how his front teeth were perfect to portray the Kid and it was pure serendipity that he was standing next to a blacksmith sign. For some reason I never got around to utilizing this photo (so it is true it's never been published), but dang it, he looks like the Kid to me!

"I had some trouble with Henry Antrim, otherwise known as Kid, during which he shot me. I had called him a pimp, and he called me a son of a bitch; we then took hold of each other; I did not hit him. i think I saw him go for his pistol, and tried to get hold of it, but could not, and he shot me in the belly. I have a sister named Margaret Flanigan living in East Cambridge, Mass., and another named Kate Conden, living in San Francisco."
—Frank "Windy" P. Cahill's dying statement
Posted by Bob Boze Bell at 3:36 PM