June 26, 2018
Last night I dreamed about a character in "The Mexicali Stud" who rides a donkey and is from Peru, having joined a ship full of 49ers who stopped in Lima on their way around the Horn to the Gold Fields in California. 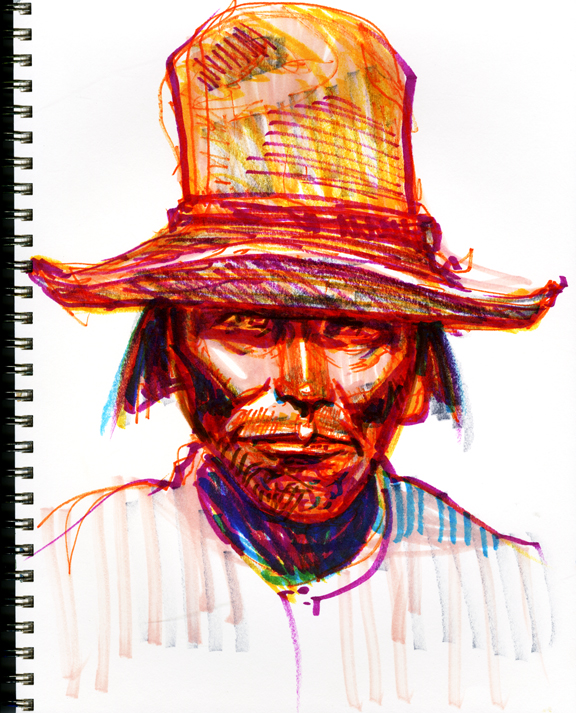 Or, how about this guy? 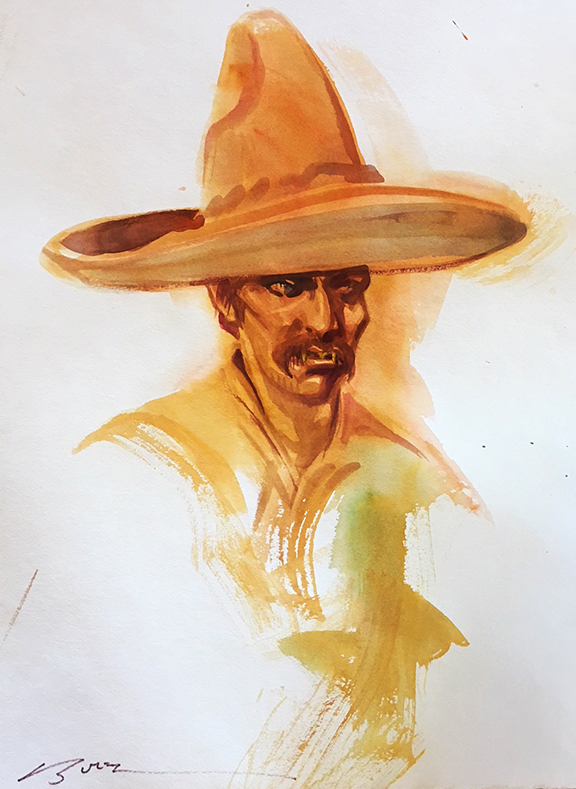 I like the character because he has been in California since 1849 and would have seen the days and scenes described in the classic "Two Years Before The Mast" by Richard Henry Dana, Jr. which was written from his "Brig Pilgrim" in 1835 on his visit to San Diego and Santa Barbara, from Boston. I am paraphrasing here:

"We stopped at a small mud building in which they had liquors, dry and West India goods, shoes, bread and some fruit. It was kept by a one-eyed Yankee who set up this pulperia, where the drinks were a real—twelve-and-a-half cents.

"The horses were saddled and bridled, each with a lasso coiled over the pommel. It cost a dollar to run them down the beach and we had to pay in advance. Horses at that time were the cheapest thing in California and you could buy one for three, maybe four dollars a piece. You actually paid for the use of the saddle and for the labor of catching the horses, for there were no corrals. The horses ran free all over the place with a dangling rope around their necks and the better the horse, the harder they were to catch. Those California horses had no medium gate and they had no need for a genteel trot and all the riders kept them at the top of their speed until they tired and then we'd let them rest by walking."

Isn't that incredible? They didn't have corrals! They just let the horse roam around with a long rope around their necks and they would come out in the morning with their saddle and bridle and catch a passing horse. If you don't believe me, read the damn book. It's amazing.

And, the bonus—real—reason I am excited about the sidekick of Ojos being Peruvian is because I visited Peru ten years ago and did quite a few sketches of head gear. And this way I get to feature those kickass hats they wear down there with the unique crown configuration. Thanks to my curator Kristi Jacobs I was able to go into the morgue and extract the month and year (August, 2008) of our trip to visit my son, who was in the Peace Corp, in Yanque, Peru and there I easily found my sketches (see below). 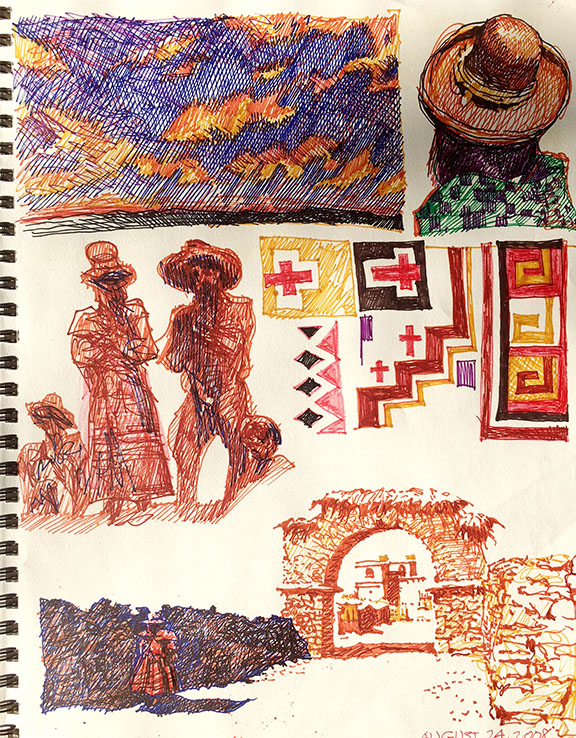 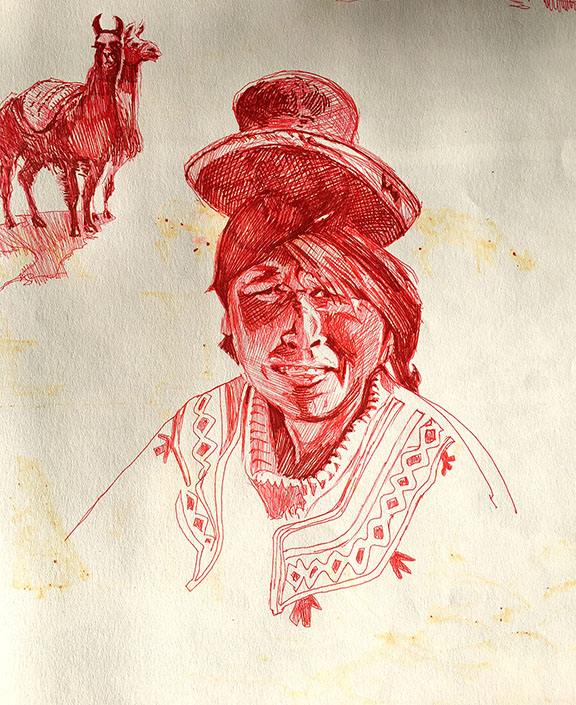 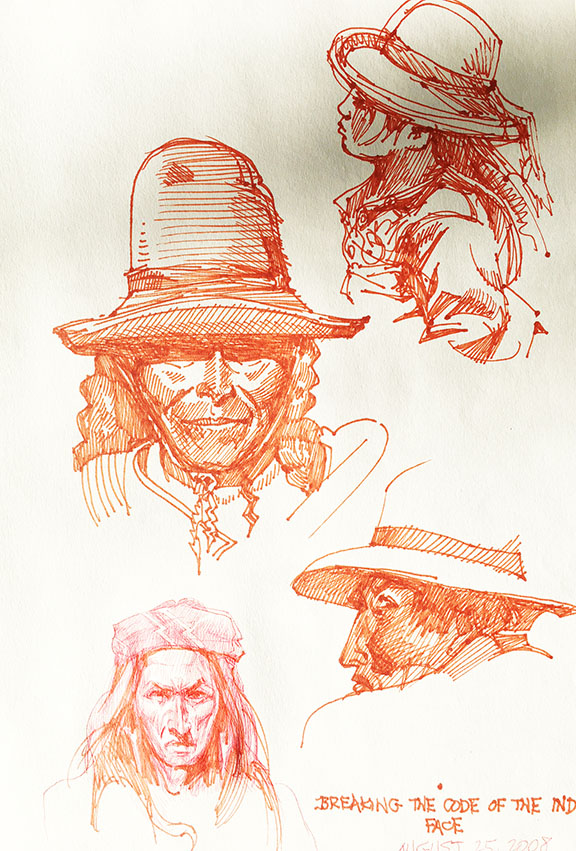 Went home for lunch and did my daily scratchboard duty. 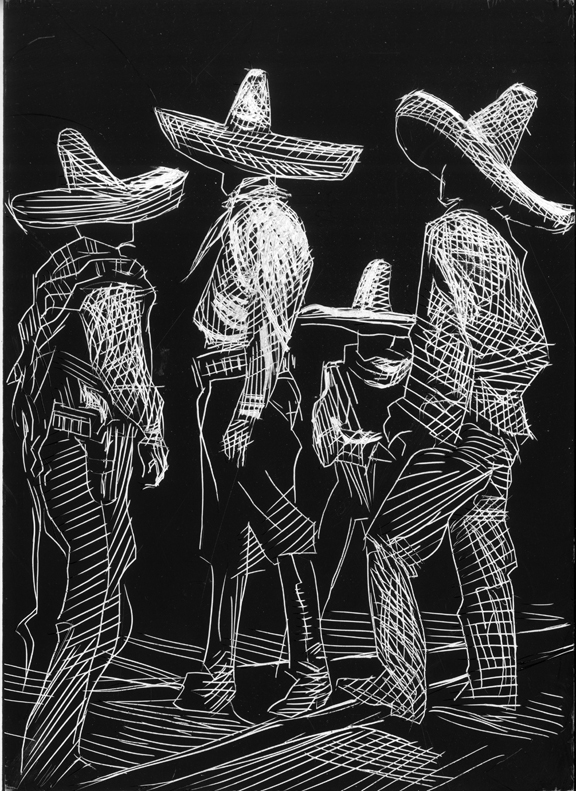 Daily Scratchboard Whip Out:
"In The Land of The Mighty Sugarloafs"

"Ladies love the sombrero. It's a key that opens a lot of doors."
—Jose Ramon Diaz, a Mexican soccer fan in Russia for the World Cup