Hot On The Trail of The Mexicali Stud

June 8, 2018
My son, Thomas Charles, is the one who turned me on to the Graham Greene classic, "The Power and the Glory" and I am so impressed that Greene has this incredible ability to capture humanity with so little description. When the whiskey priest is arrested and thrown in the drunk tank (a scene eerily familiar and accurate to my overnight stay at the Nogales Arms—okay, jail—in 1968) the prisoners are let out in the morning into the yard and Greene says, "A queue of men were bathing their faces at a single tap; a man in a vest and pants sat on the ground hugging a rifle."

That's it, and you can SEE THEM in their entirety. Every single one! And he only chose to say the seated man had on a "vest and pants" and nothing more (although "hugging a rifle" is perfect), but I can see that guy completely. How does he do that?!

So, I started writing down potent phrases like the one noted above, as an exercise, to see if I can uncover his methods and the geometry of it all. This morning I applied some of them to a story I am working on for a graphic novel.

Hot On The Trail of The Mexicali Stud

The mule stopped dead. A tiny green snake hissed away into the blackened rocks. He rode on and came to a long line of crumbling adobes and rode cautiously down the center of the dusty street. It was early afternoon. The vultures lined the tin-roof tops. A ragged peon lounged on a hammock in the shambles of a courtyard.
Ojos de Gringo reined up and leaned forward on his pommel. "How far is it to Yuma Crossing?"
"Three leagues."
"Is there a ferry?
"There was," the peon cackled as his yellow canines framed his crooked mouth. "Somebody stole it."
The flies came down and settled on the mule's neck. Osos flicked his hand across the tough grey skin and the mule flicked his long ears, drooping his head down.
"I'm looking for a white stud."
"Somebody stole it?"
"Maybeso."
"Is there a reward?"
"Maybeso."
"Lo siento," the fanged-one shrugged. "I know nothing." 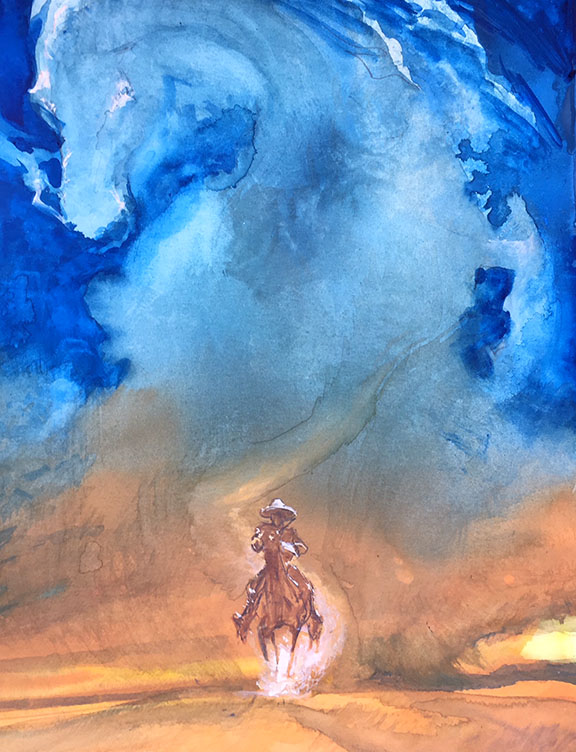 Daily Whip Out:
"Hot On The Trail of The Mexicali Stud"

"Mula. Mula!" Ojos de Gringo spurred his mule across the plaza and as he rode past the crumbling band stand, an uneasiness came over him. He turned the mule towards the Colorado and the desert took them again.

With apologies to the estate of Graham Greene. The "uneasiness came over him," and the "desert took them again," are straight up phrases from the wonderful book. As is the "green snake" and the "canine" smile. And so is "the flies came down and settled" and the mule "drooping his head down." Just so strong in a Spartan, deflecting way, which I think is a good part of Greene's genius.

In my defense, a graphic novel doesn't need most of these descriptions, since you can see the green snake and the yellow canine teeth and the crumbling bandstand, but I have to say, I am going to be using a few of these phrases, heavily changed, of course, to hide my source.

An uneasiness overtook him and, as he looked back down the trail he saw a tall cloud of dust gaining on him. It was the Plagiarism Police.