Geronimo Rode With The Seventh Cavalry? 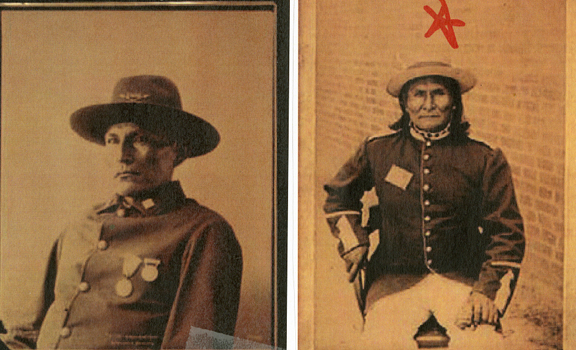 Naiche and G-Man in Military Uniforms


The image of Naiche was taken in 1898 at the Omaha Exposition in Nebraska.  He was in the US Scouts at the time (note the crossed arrows with USS over them).  Troop L, 7th Cavalry had shut down the year before and Naiche and the Apache POW soldiers transferred to the US Scouts.  The only difference in the two units was the army furnished the horses for Troop L and the US Scouts had to provide their own.  As a result their monthly pay was slightly higher than the $13 a Private made in the Troop L unit.  Sam Haozous, the future father of the famous Apache artist / sculptor Allan Houser, was a Corporal and a bugler in these units at the time.

The Geronimo image was produced in Mount Vernon Barracks, AL when the Apache (including Geronimo) were in Company I (as in "eye") of the 12th Infantry.  There are other images of Geronimo in his US Scout uniform at Fort Sill.  He was always displeased that he did not have a higher or special rank due to his legendary reputation as a war leader.  However, the army deliberately kept him at a lower rank so he would not feel too important.
Geronimo Rode With the Seventh Cav?

Many of the Apache warriors were enlisted into the US Army as POWs while in the Alabama prison before coming to Fort Sill in Oct 1894.  Initially, they were in Company I, 12th Infantry but when they arrived at Fort Sill they were converted to Troop L, 7th Cavalry.  This was one of Custer's old units that had been wiped out at the Little Bighorn in June 1876.  Troop L, 7th Cavalry was reconstituted at Fort Sill in 1891 and back filled with Kiowa, Comanche and Apache soldiers after that.  An all-Indian alternative to Troop L was the US Scouts, also under the army's command.  The tribal soldiers vacillated back and forth between these two units until Troop L stood down in 1897 but the US Scouts continued in existence. There are photos of Naiche in uniform taken in both Alabama and Fort Sill, O.T. and also of Geronimo in uniform with the US Scouts at Fort Sill.  It has always been interesting to see the looks on people's faces when you tell them Geronimo (an Apache POW) was a veteran of the US Army and a member of George Custer's old unit that had previously been decimated in Montana at the hands of Sitting Bull's warriors.
—Towana Spivey

"English doesn't borrow from other languages. English follows other languages down dark alleys, knocks them over and goes through their pockets for loose grammar."
—James Nicoll
Posted by Bob Boze Bell at 4:27 PM