The Last Tragic Days of Geronimo

July 12, 2019
Heavy into the final research and layout of my next book. 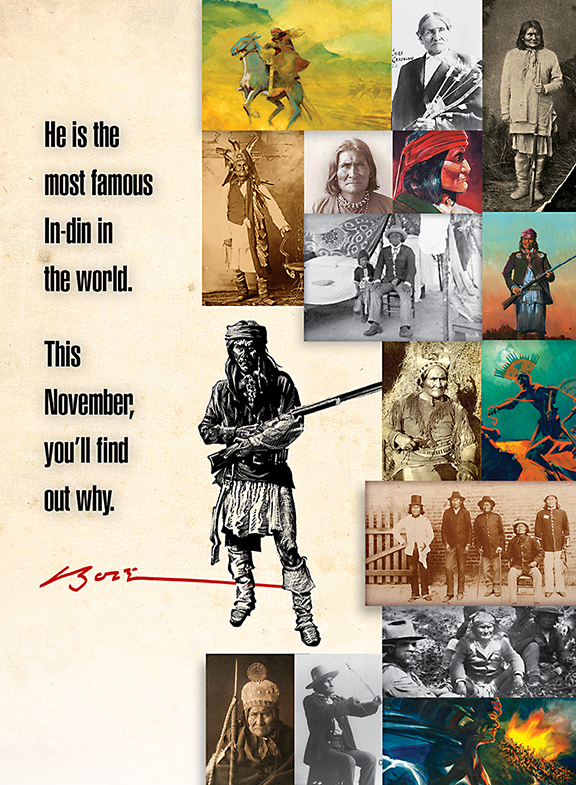 A Teaser, or Two

I want to flesh out the final days of the G-Man, as we call him, and The Top Secret Writer told me I should get in touch with Towana Spivey who just retired as the historian at Fort Sill, Oklahoma after 30 years.

Thanks to Paul Andrew Hutton, I got in touch with Mr. Spivey and here are my notes, culled from what Towana related to me. 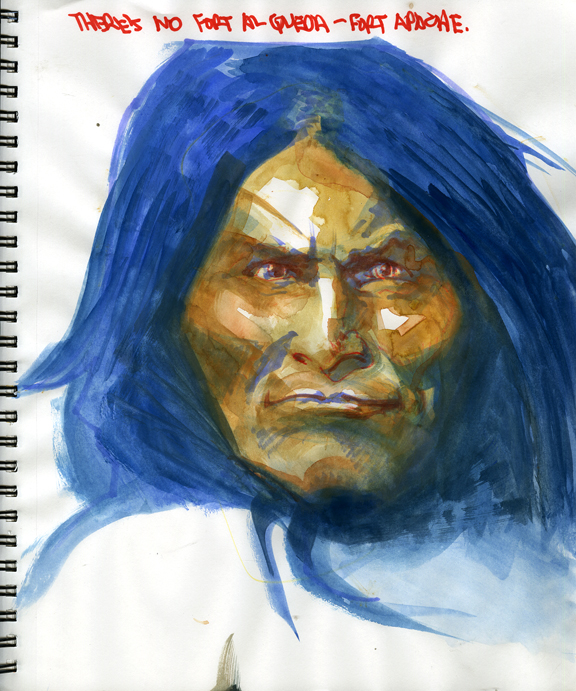 Rough Sketch of the G-Man Smirk


The Backslider
After the turn of the Twentieth Century, many Fort Sill Apaches were converting to Christianity. Missionaries from the The Reformed Church of America arrived and had regular tent revivals. There is a photo of Geronimo at one of these revivals and, circa 1902, he was baptized and converted to Christianity. He had resisted for a long time, but he felt left out of the social activities and his comrade, Naiche, had already converted and had adopted the first name "Christian" Naiche. For Geronimo, the conversion didn't take, however, and he lost interest, or more accurately, he missed his drinking and gambling ways and so he fell off the wagon, and went back to his old ways. Naiche felt disdain for his old friend and blamed most of the bad luck that followed, on alcohol and "backsliding."
Geronimo had other problems, as well. It pained him that even though he was a legend in his own time, many of the Chiricahua and Warm Springs Apaches (especially the converted ones) blamed him for the loss of their homeland and many began to shun him.
All during this period, Geronimo had a lively business in nearby Lawton, where he met travelers at the Rock Island Train Depot. He would sell bows and arrows, which he made by hand, and he also sold pictures of himself and signed his autograph for cash. Oldtimers remember him riding up on his black horse, but instead of hitching it to the hitching rail out front of the depot, Geronimo tied his black horse to a nearby boxcar where he could see it. After selling all his tourist inventory, he would go back up town and buy a piece of his favorite lemon pie. Invariably, afterwards he would find someone to buy him hooch.
In early February of 1909, after the 86-year-old warrior had made his usual rounds he was making his way back towards Fort Sill, when he fell off his horse near the junction of Beef Creek and East Cache Creek, just before dark. It rained during the night and his friends from Perico's village found him and brought him into camp the next day.
He was suffering from exposure which turned into pneumonia. The Post Commander sent an ambulance from Fort Sill to check on him, but the In-dins at Perico's village refused to let him go because they regarded hospitals as a place to go and die. When the ambulance returned without Geronimo, the commander sent them back with strict orders to bring him into the hospital.
Of course, when the ambulance finally brought him to the hospital, Geronimo died, which only added to the suspicion of the Apaches that the hospital killed him.
The body of Geronimo was placed in the stone, two-room mortuary (aka The Death House) and as the word spread of his passing, Apache women came to mourn with wailing and the slashing of their arms in the old way.
A photograph exists of the black horse-drawn hearse taking his body to the burial ground and Towana Spivey sent me a low res version of the photo, which I want for the book. 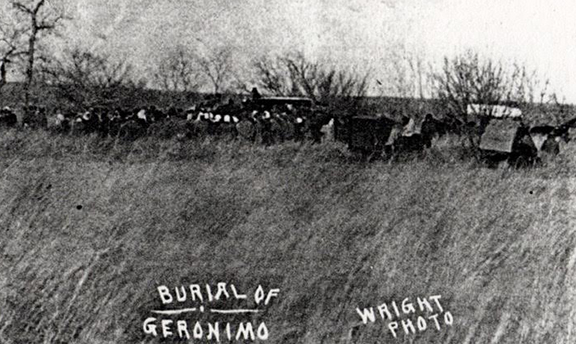 The graveside ceremony was half Apache custom and half Christian. It's probably safe to say, neither side was happy about it.

Christian Naiche gave the eulogy over his old friend's grave and criticized Geronimo for backsliding on his Christian commitments.

As mentioned, these notes were culled from Towana Spivey's emails to me. Here is his story:

On The Front Lines of This Story
I was front and center with Geronimo for over 30 years and became close friends with many Apache people including several of the original POWs at Fort Sill.  Their history is relatively unknown, often misunderstood, and filled with lots of misinformation, especially surrounding Geronimo.  Anyone who does research on this subject will frequently be confronted with variations of the history depending on the source.
My information is based on my own personal interviews and those of other military / civilian historians such as MSG Morris Swett and COL Wilbur Nye who spent their lifetimes living with the people they wrote about. Dr. Morris K. Opler was one of my anthropology professors in graduate school, and Eve Ball did a lot of her research and correspondence through the museum at Fort Sill.  In 1917 Swett interviewed various Apache informants about Geronimo's burial place and heard the stories of his remains being relocated to a "secret" place in order to avoid potential vandalism.  He believed this was the case for years until 1931 when he interviewed two elderly Apache women who were the last living participants in Geronimo’s funeral.  They verified he had never been moved and was still buried in the same spot.  Many of the Apaches still believe the story of the secret burial place today but Swett utilized independent field methods to confirm the accounts of the oldest living women in the tribe.  It has always been my experience working with the Apaches, that they would not be involved in moving a grave or handling the dead in such a manner.
Over several decades, I helped bury many Apache people and was frequently immersed in unusual and historic circumstances related to Geronimo.  This included direct contact with officials from George Bush's campaign when he was first contemplating running for president and was concerned about his grandfather’s involvement with the Skull & Bones Society; provided legal affidavits on Geronimo's burial history to President Barack Obama for use in federal court involving a lawsuit by Texas lawyers advocating reburial in AZ; had significant cultural experiences with Apaches who were angry about people who disrespected their values and burial places; addressed a national TV program featuring a descendant of the Knights of the Golden Circle “Sentinels” who advocated there was collaboration between Geronimo in his campaign against the US Army and the KKK mission of helping “the south to rise again”; and had a very eerie experience with a late night Welsh visitor who believed she was Geronimo reincarnated.  You could not make up some of this stuff!  I should write a book just about this aspect of Geronimo’s history sometime.
My latest book currently in production is titled “EXPLORING THE DEPTHS OF HISTORY:  Featuring Certain Nineteenth Century Water Wells in the Indian Territory”.  It addresses several historic military and Native American sites in southern OK that I have been involved with during my professional career. 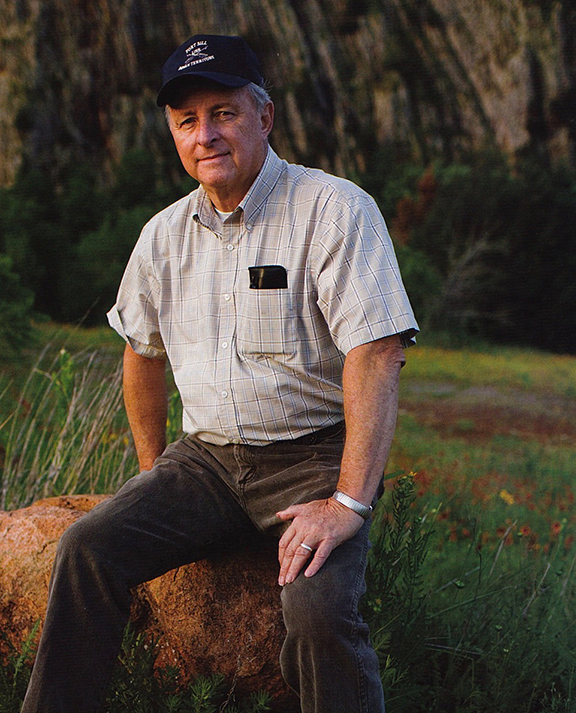 "When an old man dies, a library burns to the ground."
—Old Vaquero Saying