July 22, 2019
Just got back from Payson and our first True West Writer's Retreat. We were guests at the Don Dos house (Don's second home across the street from his real home), owned by the legendary Don Dedera (too lazy to stand, lower right). We solved some life and schemed on how to put out a magazine that people actually want to read. Here's my hardcore crew: 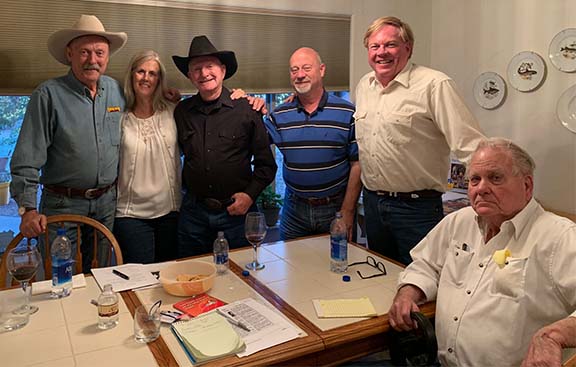 • We need to expand our social media and make it more robust with our in house talent and editorial team.

• There shall be a surprise in every issue.

• Cover planning is essential. Let's get out front of this.

• The best things come from the bottom-up rather than the top down.

• We need to tackle bigger themes, like, Damn Yankees! The Invaders Who Ruined The West (hint: this includes everyone who arrives out West and then wants to prohibit anyone else from coming. I call this the "Last Man In" syndrome)

• On The Whiskey Trail, tackle the rise and fall and the rise again of whiskey through the Old West, then through Prohibition and out the other side to the current trend of distilleries galore.

• Don't doubt the strength of who we are. We have the resources to tackle any subject.

• Expand and develop this Writer's Retreat concept and have a contributor's conference and an annual meeting with True West editorial during the True Westerner Award weekend and, or, at the Tucson Book Festival.

• Continue to expand and strengthen our presence at writer's conferences like WWA (Western Writers of America) and WWHA (Wild West History Association).

"Old men delight in giving good advice as a consolation for the fact that they can no longer set bad examples."
—La Rochefoucauld