Here's a confession: I sometimes get good stuff in my books because people ask me questions while I'm creating the book and it forces me to go find answers. When I was doing Geronimo, my artist compadre, Thom Ross, quipped, "I hope he tells the paratrooper story," and, then, dammit, I had to go find the story and several people have since told me they think it's one of the most interesting vignettes in the book.

So, here's another good example, this one regarding Billy the Kid:

"Being a musician I have often wondered about the belief that Billy's favorite song was 'Silver Threads Among The Gold' and possibly 'Turkey In the Straw.'  These of course were standards of the time period, but do you know of the sources that can confirm that Billy liked these songs and any thoughts on why he might have gravitated toward them?" 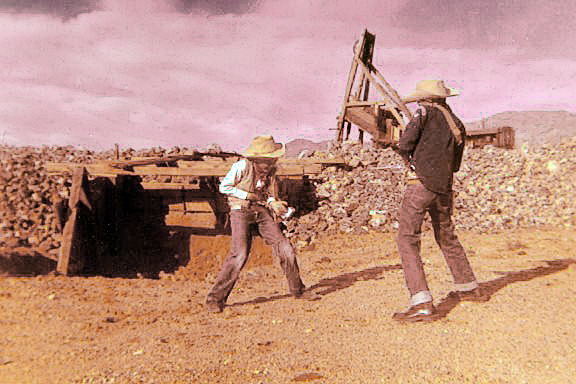 BBB Facing The Music near Chloride, 1959.

And here's another confession: because I've been doing this so long (see vague music reference above, which is actually me and Dan The Man Harshberger playing "guns" on a Bell family picnic), I know the right people to ask. In this case, a first-rate musician AND a top-researcher AND author on the Kid!

"I've always been doubtful of 'Silver Threads Among the Gold,' and I'm not certain when it's first referenced in connection with the Kid.  However, 'Turkey in the Straw' is pretty solid.  In a 1928 interview with J. Evetts Haley, Frank Coe mentioned 'Turkey in the Straw' as the Kid's favorite dance tune.  According to Frank, Billy would tell the fiddlers, 'Don't forget the gallina.'  By gallina, the musicos knew he wanted to hear 'Turkey in the Straw.'  They knew this because even though gallina refers to a 'hen' or 'chicken',  native New Mexicans used gallina for the wild turkey.  By the way, Frank played the fiddle."
—Mark Lee Gardner 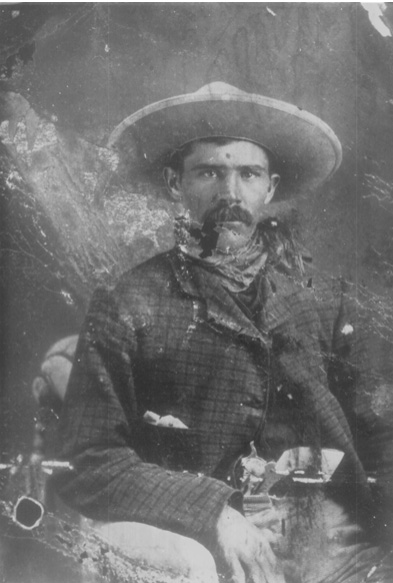 A great photo of Heck Bruner
which begs the question:  Is that
a cannon in your pants? Or, are you
just happy to see me?
Posted by Bob Boze Bell at 1:51 PM