Historians often talk about the lack of law in the Old West, but the people who lived in Lincoln County, New Mexico in 1877 suffered from too much law. 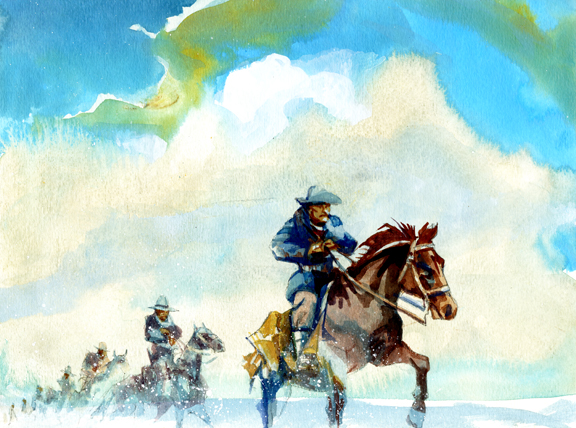 "Garrett Pushed On Thru The Whiteout"

In 1877, Lincoln County suffered from too much law, with rival posses roaming the countryside, their saddlebags stuffed with warrants for members of the other side. Both sides enlist reluctant posse members to fatten their ranks. Several, neutral farmers testify that the Regulators threatened them each with a $50 fine if they didn't help serve warrants on McSween's enemies. The Dolan side also intimidated anyone they could to join their ranks. As the arrest and recriminations spiraled out of control, everyone fears the worst. And their worst fears come true. 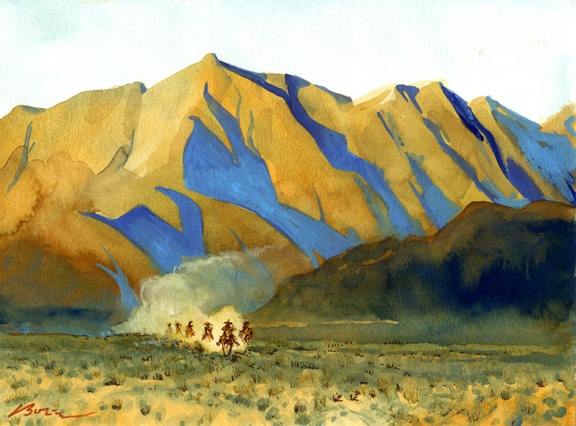 Daily Whip Out: "Dueling Posses"
May 19, 1878
Eighteen Regulators raid the Dolan-Riley cow camp near Seven Rivers. It is believed the Kid is with them. They steal 27 horses and kill Manuel Segovia, alias "The Indian," who allegedly was a member of the posse that killed Tunstall.
June 22, 1879
John Kinney and his "posse" reach Lincoln from Mesilla. They state they are in town to help the authorities, but since both sides have "authority" it's unclear who that is. Mostly they just help themselves.
June 23, 1878
Marion Turner and Billy Mathews attend church in the McSween parlor at 4 p.m. and hear Rev. Ealy's sermon, "Ye must be born again."
June 27, 1878
Sheriff Long's posse, supported by Capt. Carroll and 25 troopers, attacks McSween and others near San Patricio. No one is hit, or captured.

Daily Whip Out: "Jumped!"
June 29, 1878
Col. Cronin saves Juan Patron from being killed by a Peppin posse. Patron seeks sanctuary at Fort Stanton.
July 1, 1878
A Dolan posse arrests John Copeland at his ranch for being a McSween man.
July 2, 1878
Susan McSween shows up at Saturnino Baca's house and threatens to have the family killed if Baca sent a "posse" after her husband.
July 3, 1878
A John Long posse ransacks San Patricio looking for the Regulators and Alex McSween.
July 4, 1878
Billy Bonney and four Regulators ride into Roswell to buy tobacco and candy for Sallie Chisum. As they are leaving, they see a cloud of dust rising in the west. As the boys ride towards Chisum's ranch, the riders come into view and they realize it is a posse of Dolan men who open fire on them. George Coe remembered they "were hitting the high spots." The posse besieges Chisum's ranch for most of the day, but finally gives up and return to Lincoln.
July 8, 1878
The John Selman "posse" raids the ranches on the Ruidoso, sacking the Coe's and Saunder's ranches.
July 14, 1878
It is Sunday night, as McSween with "about forty" men, reach Lincoln. The Regulators choose Martin Chavez, "a prominent native" from Picacho, s their leader. According to George, "We requested him to accept leadership of our band, and promised to abide by his decisions and foll his plans. He readily consented, and began to draw up a plan of attack." Chavez places his men in key strategici locations throughout the town.
July 15, 1878
The McSween men prepare for war. They barricade windows with adobes, pile bags of dirt against doorways and carve portholes in the adobe walls.
"The law is a suggestion with a gun."
—Old Vaquero Saying
Posted by Bob Boze Bell at 7:57 AM