Pat Garrett's Cold And Miserable March to Capture The Kid

It was a year ago tomorrow we celebrated 20 years in Cave Creek with a big party at Black Mountain Library. That seems like a hundred years ago, now. Of course, we never anticipated all the strangeness of 2020, but then who did?!

This is my last week on the Kid project. Of course, when I get to this stage of the production cycle, I always get inspired to do more paintings than I have time to do. Like this little dittie: 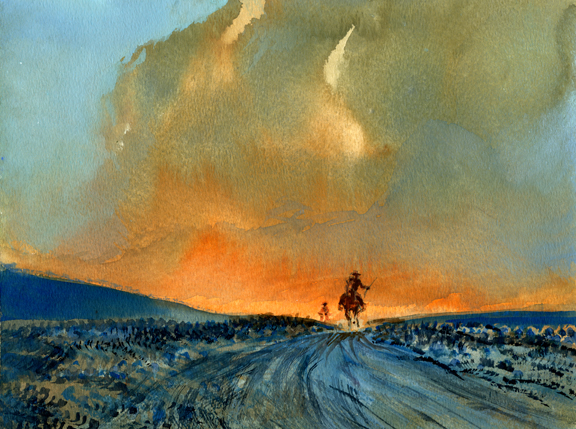 In the fall of 1877 Kid Antrim split from the Jesse Evans gang somewhere around Mesilla and while the Boys went up the west side of the Sacramento Mountains, most historians believe Billy angled off to the east, past El Paso and out across the Cornudas and the Guadalupe Range and then up to Seven Rivers. He had some adventures on that run, and legend says he sprang a compadre out of the jail at San Elizario which is downriver from El Paso on the Rio Grande and on the border with Old Mexico. This scene, above represents that escape. 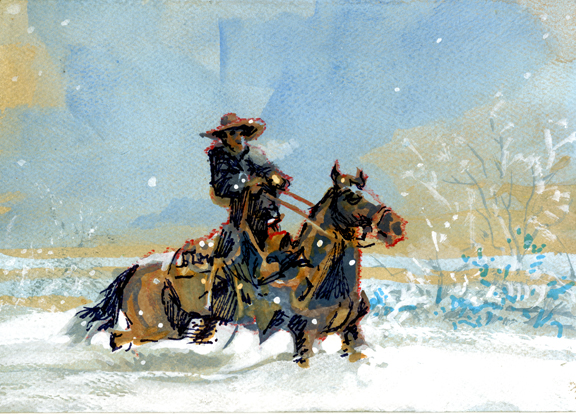 Daily Whip Out: "Billy In Snowdrift"

One of the things the movies never quite get right is the massive manhunts in the snow, which is the backbone and centerpiece of the Pat Garrett trackdown of the Kid in the winter of 1880.

Record snowfall and bitter cold temperatures would have thwarted any sane manhunter, and for the record most all of any who could, stayed in front of the hearth in November and December of 1880. Out of some 300 available cowboys in the Tascosa area, only 13 took the call to hunt the Kid and they had names like "Animal" and "Cat Fish" and "Bigfoot Wallace," you know, people I am related to and can relate to.

Moving aganst the Kid when no one, including Billy, thought he would, Garrett pushed his manhunt to the brink of endurance with frostbite and bitter cold as snowdrift conditions hampered the posse's every move. Whiteouts, with horses plunging in snowdrifts, was their daytime activities. As night, out on the plains, it was even worse! 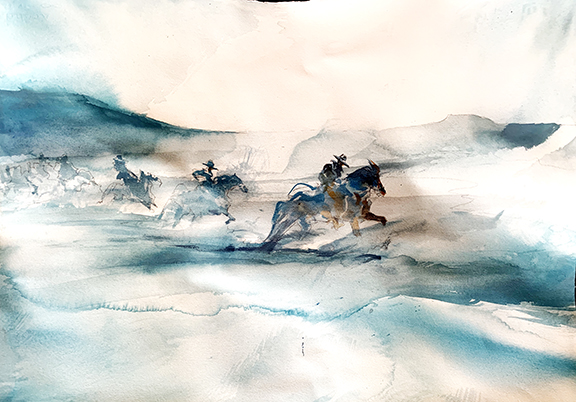 A sidenote: In the fall of 1990 I met another Kid Krazy guy Steve Randolph in Lincoln and I joined him and his dad at their campsite outside town and we were going to sleep out in the weather to get a feel for what it must have been like in 1880 when Garrett and the Kid played snowdrift cat and mouse games. I was given a thermal sleeping bag and we had a campfire, but in the night it was so cold I had to seek refuge in the cab of a pickup truck. The next day we discovered it was in the low twenties out! 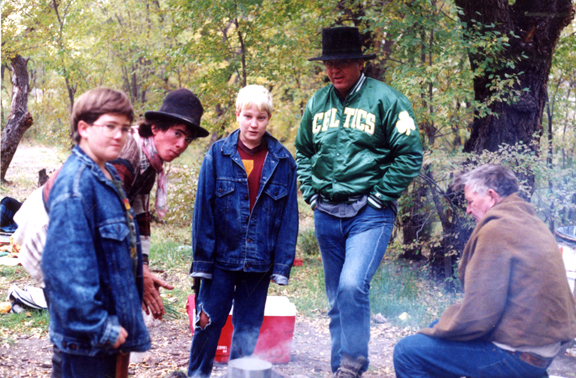 The Randolphs in Camp after a cooooold night.

Okay, contrast that with two of the Tascosa cowboys who were on the road after the Kid and when it got dark they simply took the saddle and blankets off their horses and pushed the blankets down into the snow and slept like babies! I always think of this crazy contrast.

Are we softer these days. Boy Howdy. At least this Woosie is! 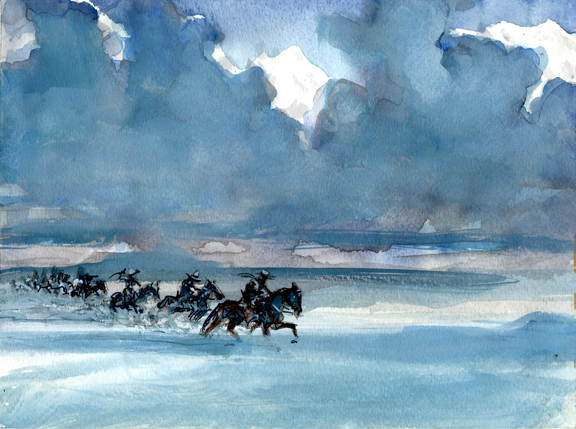 Daily Whip Out: "Garrett Pushes On"

Through deep snow, the combined posses pushed on and, of course, they finally captured their prey and, after burying two, they beat it to Las Vegas through the snow. Crazy cold stuff, this is. 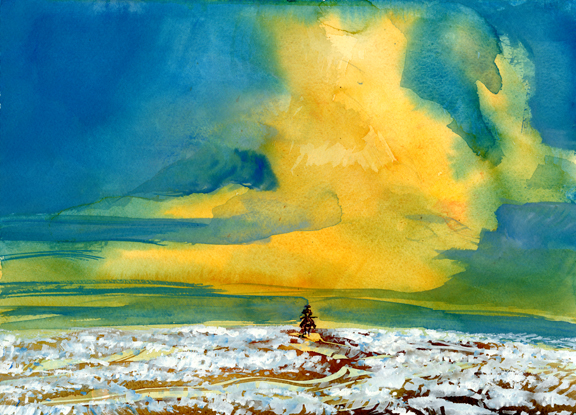 In a fine Jim Earle book in my collection, "The Capture of Billy the Kid" we get the remembrances of a couple of those Texas cowboys. One of them, Cal Polk, very bluntly tells about how rough they were, and he later served as a U.S. Marshal, but damn he and those boys were rough as cobs.

"We was all Dead Broke and had got mean and cared for nothing."

—Cal Polk, remembering his wayward ways in the cold hunt for Billy the Kid in the winter of 1880