I mentioned yesterday I am debating whether to cover the Billy wannabes in my final book on the Kid. This would include Brushy Bill and the so-called Croquet Billy along with a variety of other discredited and questionable images and theories.

To be honest, I am tired of arguing with all of the flea-market-lottery-driven-dreamers, who want me to ordain their find as authentic and when I don't, they get nasty. It just gets sadly predictable and tiring. 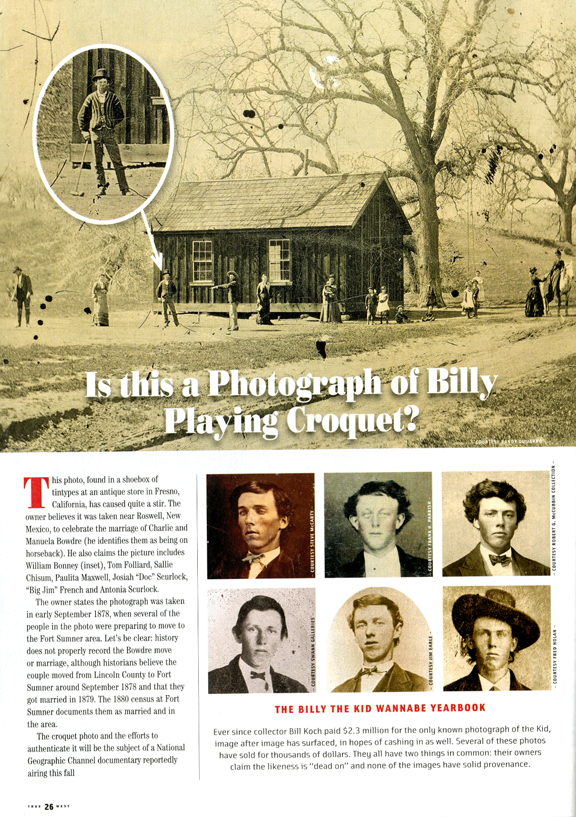 Here are some of the responses I got from my Kid Krazy friends:

"Yes, briefly include them. You could do a spread of Billy wanabees."

"I'm of two minds on this, which I know isn't very helpful.  By including Brushy and the spurious Kid images, you're just giving them more life.  However, the general public is absolutely fascinated by the possibility that Billy wasn't killed by Garrett.  So, too, the Croquet Photo.  I honestly think that readers will want to know what Bob Boze Bell thinks about both, as well as the other wannabes.  In fact, I'm sure they'll be thumbing through to see if the Croquet Photo is in your book.  So, as much as I would like to see those subjects ignored, I do feel it would be a mistake not to include your take."

—Mark Lee Gardner, author of To Hell on a Fast Horse: The Untold Story of Billy the Kid and Pat Garrett

"You could do an entire set of encyclopedias in rebutting every bogus photo or story about the Kid.  This book shouldn't attempt to be that—it's not what you intend it to be. And if anybody disagrees, tell 'em to talk to the pastor.  I'll call down the lightning."

"I think that, at most, a sidebar may be in order.  That way, you can address how the recent sale at auction of the Upham carte de visite for a staggering $2.3 million has underscored the need to remind readers who are rummaging through boxes at garage and estate sales in search of the next Billy the Kid photo about the required provenance. It can be a short sidebar that serve two purposes.  But it's your call."

"I won’t even be mentioning Brushy Bill or Miller’s names in my forthcomig book. Those attention seeking old fraudsters have received far too much attention already. In my humble opinion, you shouldn’t bother with them either."

—James B. Mills, author of the forthcoming book, The Nature of Billy the Kid
"The Pioneer's Creed: The cowards never started. The weak died along the way. Only the strong survived."
—Jim Webb, from his book Born Fighting
Posted by Bob Boze Bell at 10:52 AM