May 12, 2010
Fresh off a divorce and a repossessed truck, in the summer of 1978 I moved from Tucson to Phoenix and went to work at the hippie-alternative rag-free-weekly New Times, founded by two college dropouts Jim Larkin and Mike Lacey.

My starting pay was $110 a week and I functioned (i.e. worked long hours) as the art director, columnist (Scoops!) and cartoonist (Honkytonk Sue). It was a decade-long stressful, exhilarating experience, especially since the editor, Mike Lacey was prone to shouting matches and fisticuffs (he once punched out an assistant to the mayor of Phoenix).

Here is a photo of Mike and his then girlfriend Georgia O'Neil at our house in about 1980: 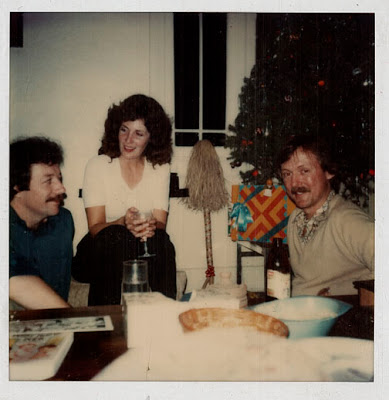 Flush with success in the late eighties, Mike and Jim went on a buying spree and methodically bought up a baker's dozen alternative weeklies around the country including the legendary Village Voice in New York. Both guys are often vilified in the press as "cowboys" which always makes me smile.


Arizona Republic columnist E. J. Montini recently caught up with Lacey and did an interview:


Yes, the tattoo on the fingers of his hands reads "Hold Fast". Although Mike and I often had our disagreements, I have to say he is a total charmer and a bit of a wit.


"Kingman named a street after Andy Devine. They should name a freeway after Bob Boze Bell."
—Mike Lacey
Posted by Bob Boze Bell at 11:03 AM