May 13, 2010
Got a pesky coyote who really wants Peaches for a snack. Makes a run for the Peachtree each morning, coming right up to our gate before retreating. Of course, when I come out this emboldens the Peach and she goes on the attack chasing the big brute out into the desert, which is exactly what the wily coyote wants. He/she even fakes a limp to draw the old girl out. If the coyote was running with a pack Peaches wouldn't stand a chance because they'd draw her out and then another one would come in from behind, but so far it's just Wily.

Grabbed a couple of ruined boards from my reject pile and tried to salvage them this morning. First up, some willy nilly washes turned into this: 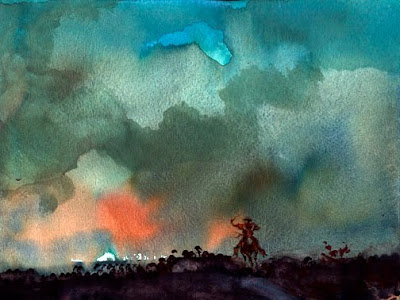 Fire Rider is the name of this puppy. A certain one-eyed half-breed scout lopes his mule in front of a lazy Mexican fire (talk about flirting with insensitive racial profiling). Speaking of which, best line from the Arizona illegal immigration furor: "But it's a dry facism," Seth Meyers, Saturday Night Live.

Meanwhile, grabbed another failed wash, based on a summer storm I witnessed last year on a road trip to New Mexico. I was coming around the bend from Magdalena, and down the slope to Socorro, when a huge bank of clouds angled in across the highway and started dropping rain in those mountains to the west of Socorro (don't know their name). I actually pulled over and sketched the whole thing. Got some decent washes going and ended up with this: 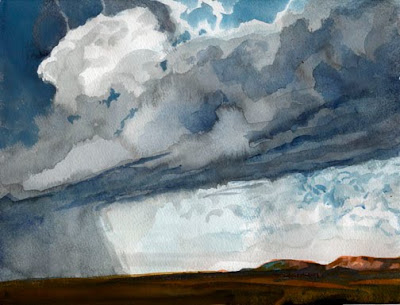 Pretty dang close to what I witnessed. The Sweeper.

"Striving for success without hard work is like trying to harvest where you haven't planted."
—Old Vaquero Saying
Posted by Bob Boze Bell at 10:08 AM