May 5, 2010
Deena Bean turns 30 this weekend and her friends asked that I send them some photos of her as a youngster. Hauled out a couple of old photo albums this morning and brought them to work. As I looked through the dusty pages, I found quite a few of the baby Deena but I also found a couple other interesting prints (me with Ed Asner, me with Mike Lacey, me in Jim Larkin's shirt that I'll post later),

So Young, So Skinny 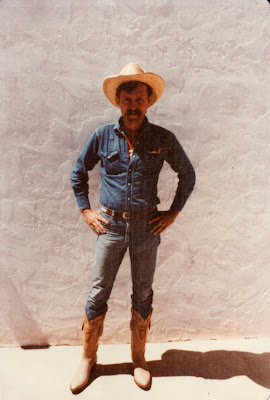 This was taken at Rio Rico Lodge north of Nogales in March of 1980. I have on my new custom made Boze Boots made just for me by Johnny Weinkauf. This is the day I drove Kathy (who was 8 1/2 months pregnant with Deena) out to Mescal Springs to see first hand where Wyatt Earp shot Curly Bill. I was also reading "The Earp Brothers of Tombstone" by Frank Waters for the first time and that was both disturbing and an eye opener.

Two years prior, in 1978, I was getting ready to self-publish my first comic book on my original character Honkytonk Sue. I culled the strips I was doing for New Times weekly in Phoenix and pasted the whole thing up at Rau Advertising in the evenings when everyone was gone. Dan Harshberger worked there and gave me the key. I had to shoot pmts (positive prints of the artwork) then glue down the type and pictures on to a paste-up-board with rubber cement! Ancient stuff!

Another Kingman childhood friend, Charlie Waters, was the publisher of the Prescott Courier at the time, and he agreed to print up the guts of my comic book if I brought up the camera ready artwork, and came early enough so that they could run my job before they ran the daily paper.

I drove up the hill, arriving in Prescott before dawn and the Courier press prep guys quickly started shooting my boards and developing them into negatives, then burning plates to put on the big presses. This is a press check photo taken by one of Charlie's photographers on that day: 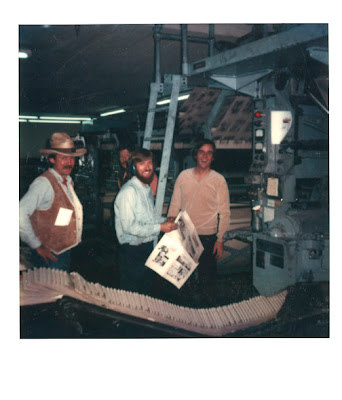 Of course, that's me at left and Chrarlie at right and this morning I asked Charlie to provide the other names: "The guy between us with the beard is Dennis Wyrick, who was the head pressman. He was a very nice guy who got his hand stuck in the press and almost lost it. Peeking out behind him is Tom Cotton, who was the production manager of the paper back then and another great guy. Regretfully, I lost track of both of them after I left Prescott."


It only took them about a half hour to run off 5,000 copies, which they quickly bundled up and loaded into the back of my F-150 Ford pickup for the drive down the hill back to Phoenix: 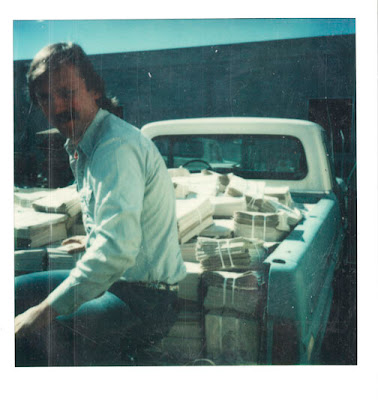 I wrote a check for, I think, $750 and change (Charlie's cost) and headed home. I remember the truck did some major swerving when I braked on the descent from Sunset Point, but I made it to Central Bindery, where I dropped these off and then came back with the printed cover (which I had printed in Phoenix). The comic came out soon after and I was invited to attend the New York Comic Con in July where my brand new comic book character was met with a bit of a yawn. Ha.


"A free press belongs to any man who can afford to pay through the nose for one."
—Old Pressman Saying
Posted by Bob Boze Bell at 2:46 PM