May 19, 2010
Every once in a while, I paint a picture that I could sell 100 times over. Several years ago when I was completing Classic Gunfights, Volume II: The 25 Gunfights Behind the O.K. Corral I did a painting of the Bisbee Stage being robbed near Hereford, Arizona.

At my art show for the book at the Legacy Gallery in Carefree I had people practically fighting over this gouache and it sold immediately: 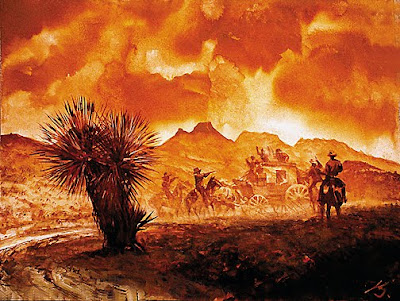 In fact, it sold to a couple from New York who paid for it, and then had us hold onto it until they could come out and pick it up. To make a long story a tad shorter, they never came. In the meantime half a dozen people, on a tour of our office would stick their heads in Carole Glenn's office, see the painting, on the floor, in the corner and say, "How much for that one?" Sorry, it's sold.

About a month ago the couple told me they had come on hard times and wondered if I might buy it back.

"Give me an empty museum and I'll fill it."
—Picasso
Posted by Bob Boze Bell at 4:35 PM