May 24, 2010
Got to Larry Clarkson's cabin near Torrey, Utah at about 5:30 last Thursday evening (we took a shortcut west of Page, up Cottonwood Canyon, but it still is ten plus hours from Phoenix). Got up at six, on Friday morning, packed up and went out to a dramatic canyon southwest of town called Fish Creek Canyon. Impressive petrogliphs on the walls of a nearby rock face. Set up looking the other way.

Of course, Ed Mell, Gary Ernest Smith and Larry Clarkson are all master plein air painters (plein air is French for "get your arse outdoors and actually look at what you are painting"). Which begs the question, if you paint an airplane outdoors, is that plein air plane painting?

While the boys painted, I sketched them painting. Here's Ed Mell hard at it, sitting in the sage brush: 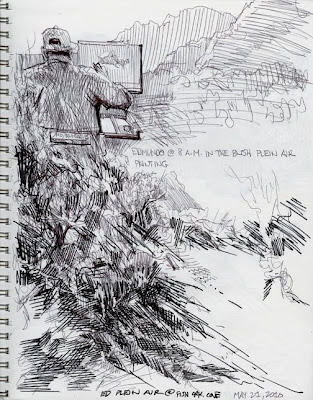 Yes, Ed had a chair that had the saying "No boundaries" on the back of it. Here are quick gesture sketches of Larry and Gary: 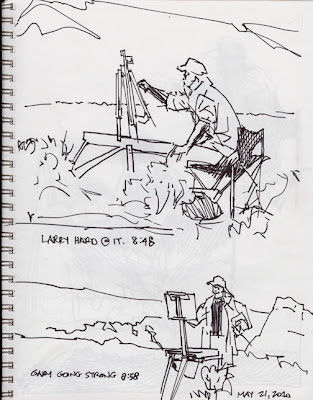 Here's another quick take on Ed (top) and Larry getting into it: 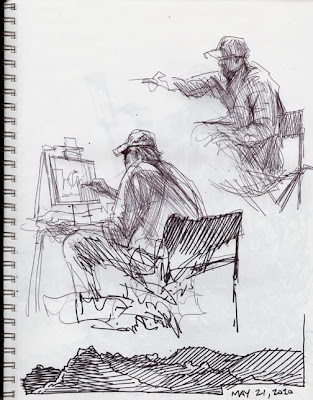 And here's Gary Ernest Smith in his Fatwah outfit: 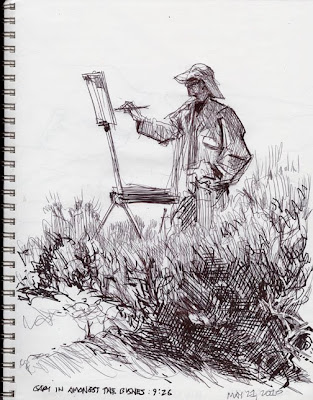 And, one more bonus sketch of Larry with the morning skyline towering over him: 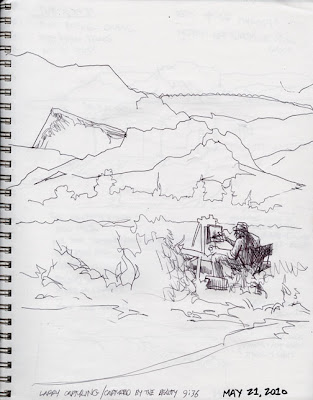 Unfortunately, because of the wind, this was the only plein air session Ed got. The next day we went out to Robbers Roost and the day turned rather nasty (plus 110 miles on rough dirt roads didn't help). We came back on Sunday, but Larry and Gary were going to try and get in another day.

I'm reading an excellent book, "Star: How Warren Beatty Seduced America" by Peter Biskind, and I took it along on the trip. It's quite a read (the subtitle should be: "How Warren Beatty seduced every woman in America"). Here's what Warren has to say about chasing history (in this case, his movie Reds):