May 13, 2010
Well, from True Grit (Coen bros filming now) to Jonah Hex (out in June) to Country Queens (filming now in Cave Creek), and now comes a report from Charlie Waters that a Vegas Elvis impersonator is going to be doing the theme song for the new Lone Ranger movie which will supposedly star Johnny Depp as Tonto (which, by the way, means "fool" in Spanish). George Clooney has been rumored for the Ranger role but has not signed on as of yet. Here's the link to the story.

Went home for lunch and grabbed a couple more rejects and splashed around. I seem to be obsessed with storm riders: 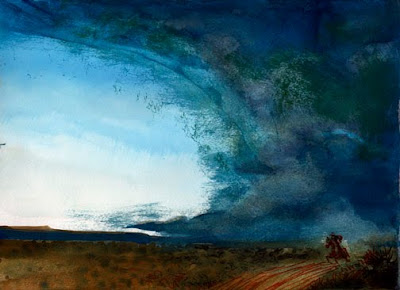 Maybe it's because sometimes I feel like we're running in front of a train. Or, in this case a terrible storm that's bearing down on us all.

Also whipped out a sunset scene: 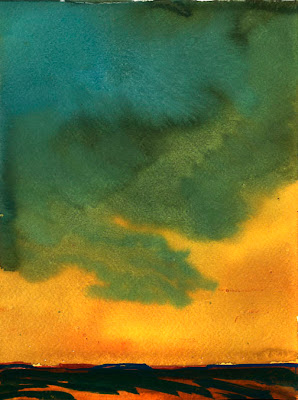 And a Last Light landscape: 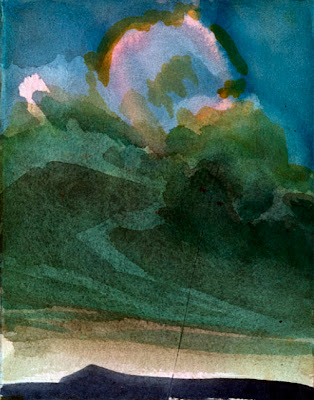 And just for grins did a cloud study, that I call Snoopy Couds: 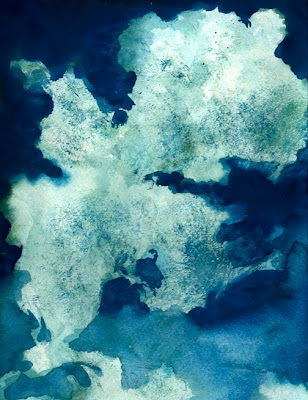 These are actually very relaxing to create. Takes the edge off the magazine deadline stress.

"Painting a ditch is better than digging one."
—Ed Mell
Posted by Bob Boze Bell at 3:05 PM