May 25, 2010
As I mentioned Ed Mell and I got caught in a nasty sandstorm on the way back from Utah on Sunday. Here we are on the way up, stopping near Page for gas: 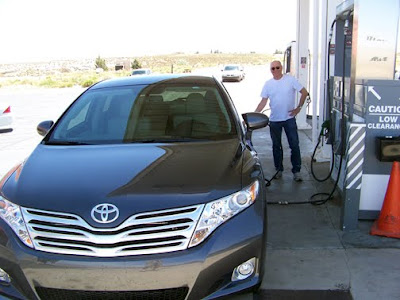 The ride is a Toyota Venza, and it got sand blasted near Tuba City on the way home. Ironically, he was on the Coppersate 500, a car tour, several months ago in his classic Corvette (1963?) and got sand blasted in almost the same spot.

Northwest of Page we took the Cottonwood Canyon cutoff, a dirt road and about ten minutes into it we ran across a herd of cattle (we later ran into longhorns and stopped again). Here's Ed lusting after one of them: 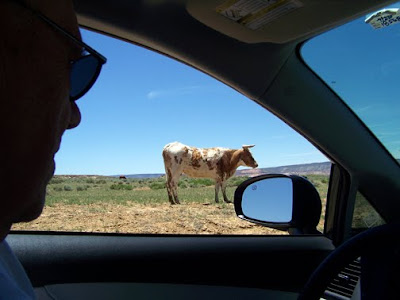 Ed liked the markings and took several photos. His longhorn cattle paintings are quite popular, so this was a lucky moment for Edmundo.


"You have to be eligible for luck to strike, and I think that's a matter of education and preparation, and character, and all the other solid attributes that sometimes people laugh at."
—James Michener
Posted by Bob Boze Bell at 10:17 AM