May 17, 2010
Walked down to the Buffalo Chip Saloon this morning to talk to the young directors of the movie being filmed in Cave Creek, Queens of Country. The popular dance hall is about two hundred yards east of the True West World Headquarters.

The first thing I noticed, besides the rows of big trucks in the parking lot was the black out on all the doors and windows. Hollywood shooters hate natural light and will do anything to dampen or obliterate it: 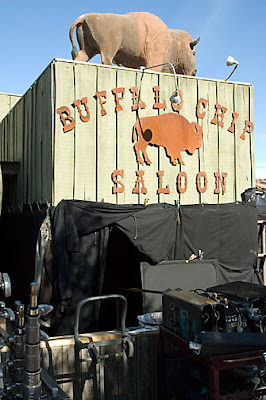 I knew several of the crew because they are local guys. Turns out it's a small movie, $7 million budget, but it sure looks big. The Line Producer Connie Hoy also knew me and we talked for a minute. She had to laugh about the Sonoran News report that the EMG signs directing trucks to the locations stood for Exclusive Media Group. According to Connie, they are actually from a Will Ferrell movie, Everything Must Go, which they just wrapped on, and she bought the signs to use on this flick. Ha. Too funny.


The two directors, Ryan Page and Christopher Pomerenke came over and introduced themselves. The two previously wrote and directed Blood Into Wine a documentary in part on Maynard James Keenan the lead singer of Tool (he's also the villain in this movie), who has several wineries in Arizona, Jerome and elsewhere. Marshall Trimble worked on the film and went to the premiere down in Scottsdale, and quipped to me, "I haven't seen so much cleavage since I was born."


My daughter Deena and two of her friends went on a tour of the wineries last month based on seeing the movie.

Christopher is a musician, plays drums, and has worked with Ween and Modest Mouse among others. Being a drummer myself we compared faves and he impressed me with his comment that when it comes to great bands, the lead guitarist likes his drummer, the example being Jimmy Page and John Bonham of Led Zep. That scored major points with me right there. As I told him, on the way in to work I caught the middle section of Whole Lotta Love on my old station KSLX where Page comes yo-yoing off that freakout bridge and Bonham suddenly, out of nowhere, hits every drum in his kit with telephone poles, culminating in the crudest, heaviest, bitchin-est guitar licks that have ever, I mean ever, been laid down.

I asked where the plot point of the movie came from about the iPod being found in a truck stop and Christopher said he was at a Mac store at 24th St. and Camelback in Phoenix and he found an iPad on the ground, took it home and turned it on and it said "happy birthday" and he wondered who it belonged to and the story behind it.

As we were chatting up comes the star, Ron Livingston (Band of Brothers, Sex In The City) to go over some lines. He pulls out a mini-script. Actors carry these because they can hide it in their clothes then pull it out between takes to review their lines. Here they are, Ryan, Ron and Christopher going over this morning's setup at the finals of the dance contest: 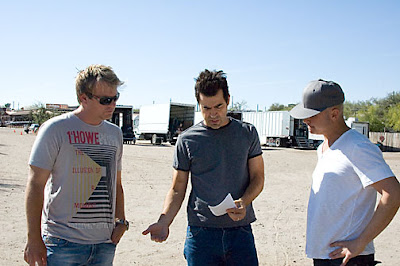 I asked them why they came back to the Chip after several days of shooting there last week and Ryan told me, "Because Larry, the owner wouldn't let us film during the weekend." He allegedly didn't want to lose a "million and a half in beer sales." So they filmed the semi-finals of the dance contest last week, and this morning they begin the finals.

The shoot lasts until June so it's quite ambitious. I'm rootin' for them.

"You have to be eligible for luck to strike, and I think that's a matter of education and preparation, and character and all the other solid attributes that sometimes people laugh at."
—James Michener
Posted by Bob Boze Bell at 4:03 PM