May 18, 2010
So how do you draw someone who doesn't want her photograph taken? Well, for one thing you talk to people who have met her. One person I talked to is a professor of history at the University of New Mexico and he described her as a "faded blond bombshell." You mean like Farrah Fawcett, or like Madonna?

No reply. Not much help either.

The next person I talked to met her in court (it should be easy to surmise who that is) and this witness said she has long, straight blond hair and is very skinny, oh, and she seems to prefer black. Now we're getting somewhere. Did a batch of sketches yesterday morning trying to pursue the descriptions like a police sketch artist might: 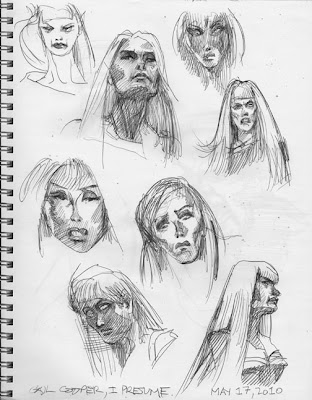 While sketching these, I remembered and realized that Ms. Cooper sees herself as the hero of the digging up Billy the Kid story and probably sees herself as, well, more like this: 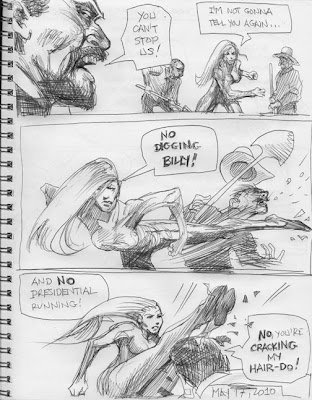 "No man is against you, he's merely for himself."
—Old Vaquero Saying
Posted by Bob Boze Bell at 9:38 AM