May 24. 2010
Long trip back from Capital Reef, Utah, but saw some spectacular country and got some great inspiration. Left Larry Clarkson's cabin at about 7:30 yesterday morning and came back via Hanksville down to Mexican Hat, dropping into Gouldings at Monument Valley. Very windy and dusty. I drove Ed Mell's new Toyota Venza while he snapped reference photos. We both marveled all the way down as the canyons just got more and more amazing, with the sandstone strata turning to a dark chocolate as we got closer to Canyonlands. Stopped near Hite, just south of the Colorado River as it drains into Lake Powell, got out and took in the panorama. Both Ed Mell and I were literally gawking at the sweep of the multiple canyons and I finally said, "Now God is just showing off."

We both laughed, met a couple from Saint Louis, and drove on.

Just beyond The San Juan Goosenecks (where the river breaks back on itself in wild returns) we hit major dust. In the distance we could barely make out the iconic spires of Monument Valley, floating mysteriously in the haze. Had lunch at Gouldings Trading Post where John Wayne and John Ford spent many a night while filming The Searchers and their legendary cavalry trilogy.

On the way out to Kayenta we came upon the giant volcanic neck of Agatha Peak which really loomed in the dust like some giant pirate ship in thick, amber fog.

Got up this morning and whipped out this little study from memory: 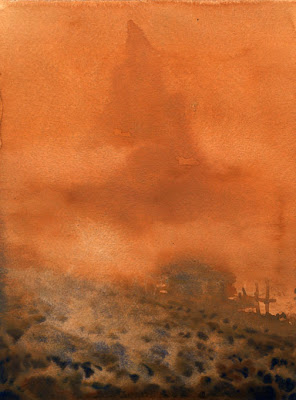 The lone hogan is a bit of a fudge, since most of the dwellings today on the Navajo Res are trailer houses, but I remember when I was a kid that there was this lone hogan at the foot of Agatha Peak and I often thought about what that must have been like to get up every morning and see that giant monolith in the back yard.

Made some other sketches and wrote down what I learned on the trip: 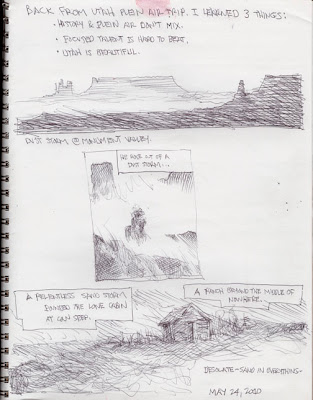 "Creative minds always have been known to survie any kind of bad training."
—Anna Freud
Posted by Bob Boze Bell at 12:12 PM