May 26, 2010
On the way back from Robbers Roost last Saturday, as we rattled along the red dirt roads of the San Rafael Swell, I pointed to the distant Henry Mountains and asked Gary Ernest Smith how he would paint the effects we were seeing. He told me he would mix a bit of Cadmium Red Light, a touch of Alizarin Crimson and Ultramarine Blue and mix it all, cheating toward the dust hues, and then tinting it with Titanium White. I wrote that down in the margin of my sketch book (see below): 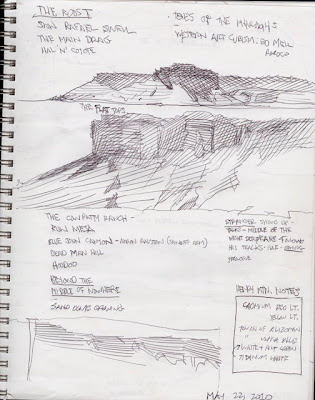 Last night, after work, I went home, poured a glass of Two Buck Chuck Cabernet and went out to the studio to noodle the GES (Gary Ernest Smith) color scheme to see what would happen. Actually, some pretty cool effects happened and I whipped out four different backgrounds. Gave up for the night and slept on it.


Studied them this morning and took one of them to see if I could put in the mountains in the background. 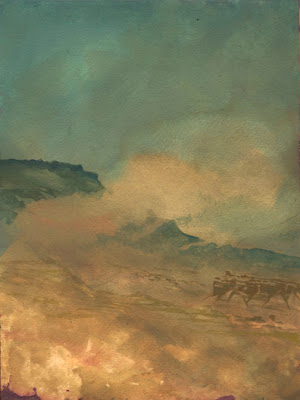 Not finished, but the sleep worked for me. Gee, I wonder what ol' Steinbeck has to say about this?

"It is a common experience that a problem difficult at night is resolved in the morning after a committee of sleep has worked on it."
—John Steinbeck
Posted by Bob Boze Bell at 11:50 AM