June 21, 2016
Cooler out this morning. Only 90 degrees at 6:45. I know this is ridiculous, but given the record heat of the last two days, it actually feels cool.

Someone sent me a photo of a dramatic sunset near Kingman (was it you Ray Short?) and I found it this morning and it inspired this study.

Daily Whip Out: "Memories of Home"

I also worked on a rough for a friend of mine who is doing a book on a bad boy named Jack Helm: 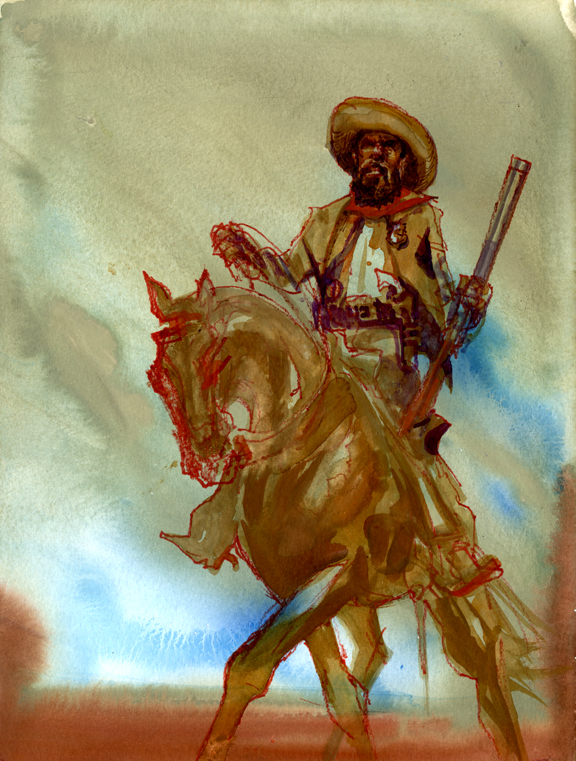 Well, full disclosure, he didn't ride far. He was shot down by one of my "kin"—John Wesley Hardin.

More Blowback On Thoreau vs. Threw
Come on Bob, do you really expect English speaking and spelling people to interpret San Jacinto to replace a "J" with and "H" when reading a name? Or replace an  "I" with and "E" or an "OIS" with "WAH"? If you want English people to pronounce it the Spanish way when reading a name, spell it the English way and we will pronounce it as the Spanish do. Maybe we should pronounce Illinois as "Illinwah" or Jackson as "Hackson". Use some common sense, we are taught to speak words as they are spelled in English. You can not expect everyone to know just how a word is pronounced in other languages. Sometimes we know, but most of the time it is merely a guess. Do you really expect everyone to know how to pronounce every word in every language?
Other than that, I enjoy your articles.
—Bob Beian

And, by the way, how do you pronounce Beian? Is it Bee-Ian? Or Bean?

I got this back from Mr. Beian: "It is the town in Norway where my father came from and it's pronounced Bay on" So let's see if I got this straight: a fellow Norsky who has a weird spelling of a foreign name is taking me to task for not cutting him slack on mispronunciation of Spanish, French and proper names like Thoreau? Kind of proves my point, no?

"Every generation laughs at the old fashions but religiously follows the new."
—Henry David Thoreau