June 29, 2016
When I first attended Mohave County Union High School in 1961 the county was growing so fast they built a string of modern structures, including a new gym, to the west of the "Old Building," and the just built structure was immediately dubbed the "New Building." Of course, once upon a time the "Old Building" was known far and wide as the "New Building" and the pride of Kingman and all of Mohave County. Kids were bused in from Wickiup, 55 miles to the south; Valentine and Peach Springs to the East; Dolan Springs to the north; and Bullhead City to the west. In some cases, the kids got on the bus in the dark to go to school and then, after school, rode the bus home and got off the bus in the dark. Mohave County Union High School was the only high school in the fifth largest county in the country and in the beginning everyone in all four grades fit inside this "New Building." 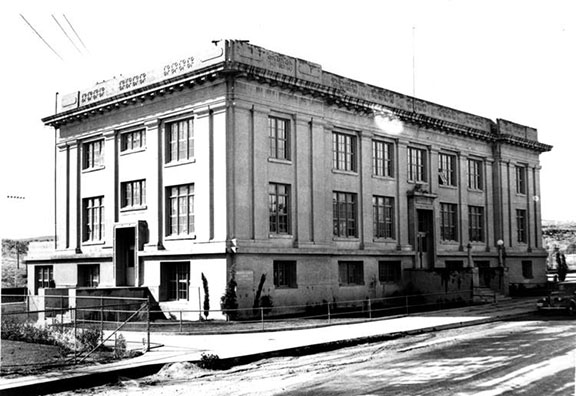 The "Old Building" When It Was New

The "Old Building" burned down in a suspicious fire about 25 years ago. For one thing it's all concrete, so it would be hard to burn unless you really, really wanted to see it go, and allegedly some local politicians wanted exactly that. Whatever the truth of these pernicious rumors, I used to walk down the hallway of the main floor (the row of windows above the lower horizontal dividing line) and stop at my mother's class picture (Bobbie Guess, class of 1939) and marvel at being in the same school building she graduated from way back in those ancient days of yore. Never mind that the distance back to my graduation spans 51 years while the distance from my gazing back to her day was only 21 years). I imagine she and her thirty-some classmates always referred to the school house as the "New Building."

Now all of the "kids" who attended classes with me in the "New Building" are old, but I would bet you almost everyone of them would refer to the photo, above, as the "Old Building."

"The beauty of a face is a frail ornament, a passing flower, a moment's brightness belonging only to the skin."
—Moliere