June 15, 2016
Last Saturday afternoon, I was at the private party for Paul Andrew Hutton's book premiere at Marv Kaiser's beautiful home in Williamson Valley, north of Prescott, Arizona. Among the several dozen guests was a Scandinavian gentleman who had a pronounced Norsky brogue, which I immediately recognized because my grandmother, Minnie Hauan Bell, was from Norway and she had that peculiar way of talking, perhaps best encapsulated in the cliche phrase that Garrison Keillor sometimes pokes fun at: "I'spose," (I suppose). It may sound goofy and sing-songy to some, but it lands on my ears as pure poetry.

When I mentioned to the Scandinavian and his American wife that I was kind of amazed that not one, but two different Norskys had traveled deep into Mexico in search of lost tribes in the late nineteenth and early twentieth century respectively, she scoffed, and rolling her eyes, said, "It doesn't surprise me at all. Scandinavians are EVERYWHERE."

Must be the Viking blood.

More Tales of Norsky's On The Loose 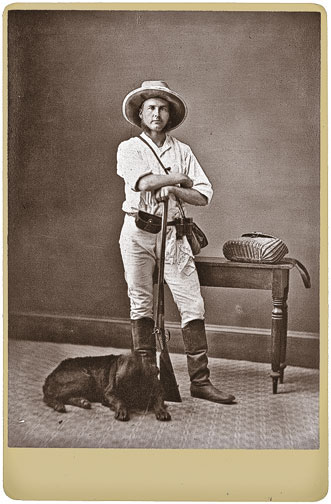 This dude pranced across much of Arizona and two-thirds of Mexico shooting photographs (he had a Kodak with him in 1890!) and taking specimens. Oh, and the dog's name is Apache.

Before he went in search of the mysterious cliff dwellers, he lived with cannibals in Australia for four years (which is when the above photo was taken). He found them loving people who, upon grilling, ahem, they admitted to him when it came to eating, anglos were kind of tough, but Asians were delicious. This is a line I have to attribute to Richard Grant, who allegedly was quoting Lumholtz, in Grant's magnificent Sierra Madre book, "God's Middle Finger," which I just bought two extra copies for my kids at Guidon Books in Scottsdale, today.

But I digress once again.

Because of his Australian experience he came to the U.S. on a speaking tour and after charming his east coast hosts, he proposed a search for the lost tribes who inhabited the cliff dwellings in the Southwest and Mexico. More than a few "subscribers" put up $1,000 each and one in particular, who he refused to name (Carnegie?) put up the lion's share of cash. After being funded, Lumholtz was subsequently officially sponsored by The American Museum of Natural History in New York. And in the summer of 1890 he traveled to the Southwest and visited Zuni, the Navajo Nation and then proceeded to Mexico City to meet privately with the President of Mexico, General Porfirio Diaz who met with him for an hour in the Palacio Nacional. He was granted free passage for his baggage and the privilege of a military escort whenever it was deemed desirable. In other words, he was going to go in style. He brought barrels of honey, which he enjoyed eating daily and he also brought along his library.

So where did he choose to start this epic expedition? Why Bisbee, Arizona Territory, of course, although he had a heck of a time getting the necessary mules, donkey and horses. Carl complains a certain Arizona character who posed "as a gentleman" actually raised his prices and then "delivered unbroken animals." Much time was lost, he tells us, because the unruly mules "persistently threw off their packs and had to be subdued and reloaded."

Trying to find good men for the journey was just as difficult: "to select the right ones among the cow-boys and miners of the border lands is most difficult." And yes, he spelled cowboy with the hyphen, as in cow-boy. He also disliked another aspect of Bisbee: in order to "get away from the cramped little village and its unsavoury restaurant, I established my first camp four miles out of it in a commodious and pleasant opening, where we could do our own cooking." I would have thought that in 1890 Bisbee would be teeming with restaurants, but evidently not.

Lumholtz also disliked the rough cow-boys he hired, saying the men "did not work at all well with the Mexicans. They generally considered themselves vastly superior to the latter, whom they did not recognise as 'white men.' Personally, I preferred the Mexicans, who were obedient, obliging, and less lawless than the rough, mixed-white citizens of the American Southwest." After one of the cow-boys offered to "get rid of" a custom-house official south of the border, Lumholtz had had enough and he "gradually weeded out this unscrupulous element among the men, and replaced most of the American with Mexican muleteers, who are far superior in that particular line of business."

"The [Apache] raiders had made themselves absolute masters, and so bold were they that one time a certain month in the year was set apart for their plundering excursions and called 'the moon of the Mexicans,' a fact which did not prevent them from robbing at other seasons."
—Carl Lumholtz, explaining the devastation and "ignorance" in the northern reaches of the Sierra Madre