Off The Grid & Mickey Free In The Can

June 13, 2016
I was waiting for Kathy last Friday, as we were getting set to leave for Prescott and the Paul Hutton book signing extravaganza, the next day at Peregrine Book Company. So, to kill time, I sat down to noodle some paint, without any ambition, intention or direction.

Daily Whip Out: "Off The Grid"

I often do boxes, or simulated frames when I'm doing Old West style illustrations, so it makes some sense that when I uncouple my brain and let it go where it wants to go, all those greased grooves would naturally slide into multiple boxes.

Had a ton of fun in Prescott with many of my Old West compadres, including Robert Utley, Thom Ross, Rusty York, Paul Hedren and Brian Dippie. The entire weekend was hosted by Marv Kaiser, who promised Hutton a big book signing with all his friends if he completed the book. Four years later, Paul did just that and we had a record setting crowd at Peregrine Book Co. on Saturday with standing room only. Big dinner on Saturday night at Marv's country club and then many lies were told into the wee hours. Got home Sunday and crashed. Got up this morning and got back to business, whipping this out before I came into work, to put the finishing touches on our Mickey Free coverage.

Daily Whip Out: "The Chase" 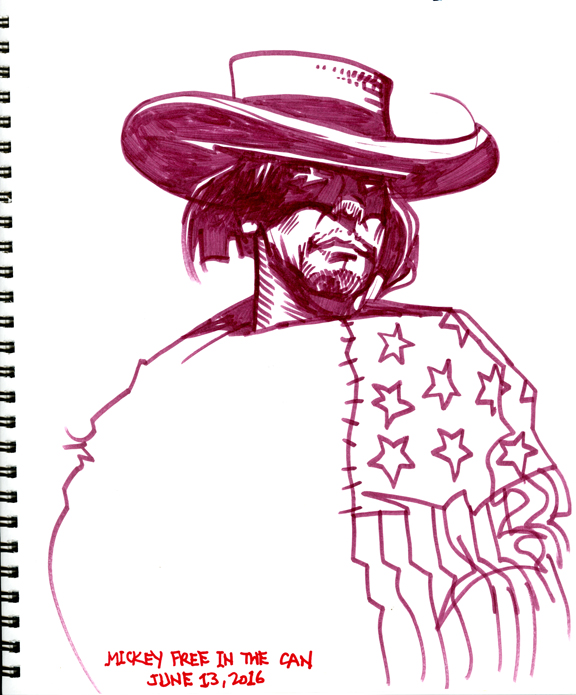 "Fiction is truth's older sister. Obviously. No one in the world knew what truth was till somebody had told a story."
—Rudyard Kipling