Welcome to Hell, Population Two, Little Ol' Me And A Melting You

June 20, 2016
First day of summer. Not sure I am ready for the heat. That was a joke. Yesterday it was a record 118 degrees. Four people died over the weekend from hiking! Hard to believe anyone would even attempt it. Just walking from the house to the studio was like walking through a blast furnace. Can't imagine what it was like being here in the old days. Well, actually I can. There was no AC in cars back in my day and evap coolers were few and far between. One of my fondest memories of growing up in Kingman was sitting in front of the window with the air evaporative cooler at my grandmother's house on Jefferson Street. It was only cool right there at the point of entry and the rest of the house was stifling, but, oh was that one spot heavenly. Also, the banging rhythms of that old box takes me back.

Searing Bridles On The Yuma Stage

I was reading about a stagecoach journey from Prescott to Yuma in the 1870s and as the team descended down out of the Bradshaw mountains into the Salome—Quartzite area, the coach pulled into a stage station and the stage hands, who changed out the teams, could not touch the metal bridles without burning their hands. They had heated up that much. Imagine how that tortured those horses.

It was 93 degrees in Flagstaff and 102 degrees in Prescott. The Yuma-Blythe corridor hit 120s.

Of course, some of my earliest memories are of heatwaves moving across the rippling highway with rivers of undulating air crossing the road in the distance: 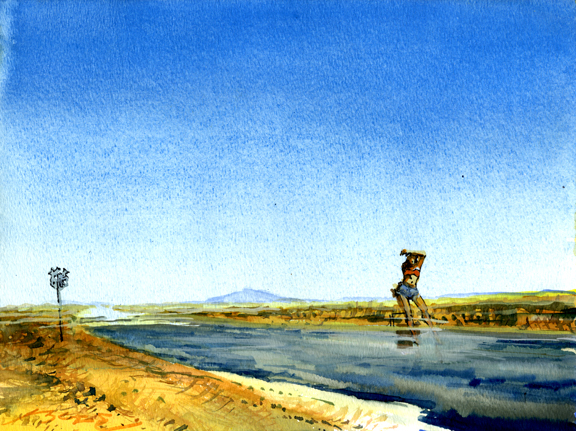 The rippling horizon still eludes me as an effect. For one thing, it doesn't bend the near stuff, only the horizon. 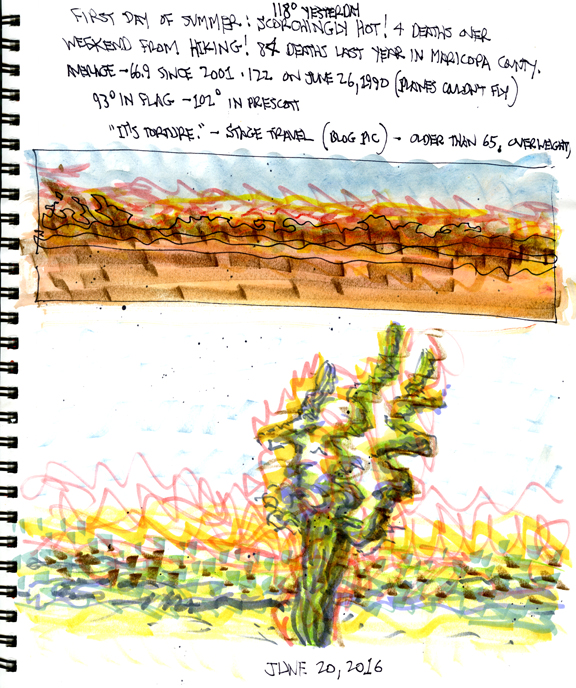 I remember going by a desert house near Happy Valley Road in north Phoenix. My roommate, Charlie Christie had an aunt and uncle who were living in a homemade rock house up in the lava beds on the west side of I-17. This was in 1966 and we were on our way back from Kingman to the U of A in Tucson and he wanted to stop and say hello. It was June and very hot out. I remember the old couple (probably in their early sixties) were readers and their house was full of makeshift bookcases and the books were almost steaming it was so hot. When we pulled up they were sitting in the narrow shade on the northside of the house, panting. They looked miserable. I wondered how long they would survive out in this heat.