June 15, 2016
We were going over the final proofs of our Mickey Free graphic novel excerpt to run in the next issue of True West. The Top Secret Writer made it clear he did not like the name Zig Zag Canyon, which I had come up with for the name of the place where the Apache Kid is hiding.

"Why not?" I asked, defensively.

"I don't know," Hutton said, standing his ground: "it just sounds too modern."

"I got it from J. Frank Dobie, who was writing about a famous lost mine described as being in 'zigzag canyon' which dated from the 1860s."

So Zig Zag THIS Mo Fo!
Here's the Norwegian explorer Carl Lumholtz, describing his Sierra Madre expedition in 1890: "On December 31st we moved up a steep zigzag trail. . ."

In addition to the Lumholtz book, "Unknown Mexico, Volume I", I'm reading "The Apache Indians: In Search of the Missing Tribe" by Helge Ingstad (another Norwegian) and in the introduction, his daughter Benedict, tells of him coming to Phoenix and getting a job as a cowboy from Vic Householder (the Householder name is prominent in Mohave County) and from there he is introduced to the Guenther family at the White River Mission on the the Apache Reservation. "Dang," I expostulated to Hutton who went to Pinetop with me in 2006 to meet Pastor Guenther. "Wish we would have known this when we met Guenther."

Why did the Apaches separate from the Northern Athabaskans roughly 1,000 years ago? The circumstances of the Apaches' ancestors' departure from the north are controversial with some Apaches maintaining they have always been in the Southwest. Others claim the mischievous behavior of one family's dog brought about the split. Figures. Dogs have started more wars, at least in my neighborhood.

It turns out Helge Ingstad talked on the telephone with Grenville Goodwin, but they never met. Both were self-taught ethnographer and anthropologists. 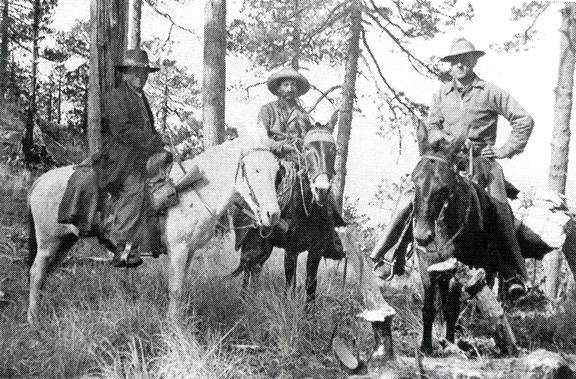 High in the Sierra Nacori on the hunt for the Apache Kid's daughter;
left to right, the old Apache Yahnozah, the Yaqui Indian Mora and Helge Ingstad, 1937.

"The urge to fight lies deep within them, and they wander far and wide on raiding parties, the terror of the permanent-dwelling Indians. The Apaches are always ready to fight. From when they are young they are trained to endure severe hardship and depravation. Their strategic plans are laid out with the utmost care, and in battle they know no mercy."
—Helge Ingstad, Norwegian explorer and self-taught ethnographer