Getting The Look of Wild Bill Right

October 11, 2017
I've spent a good part of my life trying to capture the look and feel of a fleeting time in history: basically 1860-1890 on the American frontier. Like so many of my Old West maniac pards, I spend an inordinate amount of time studying the details of photographs like this little gem:

Deputy U.S. Marshal Wild Bill Hickok, at left, with a group of locals at the
Quarter Master's Department, Fort Harker, Kansas. Author Joseph Rosa
speculates the date of this Alexander Gardner photograph as
"on or about September 27" 1867. Notice how Hickok looms over
his fellow citizens and wears his two ivory-handled Colt 1851
model Navy revolvers in open-topped holsters
worn butts forward in a simple belt rig. 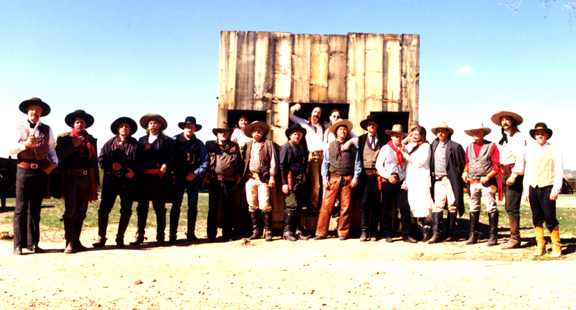 This photograph was shot at Pioneer, Arizona. It was not intended to duplicate
the top photo, but taken merely to document all the people who posed for
photographs that day. But the similarities to the Hickok photo are striking.
This is my volunteer crew who often showed up
and worked for free to help me capture authentic reference photos
for my books, and this was for my Wild Bill Hickok book
(which I started 22 years ago!). This photo is circa 1996 and
there are three Wild Bill's in the photo. Can you spot them?
Hint: Jerry Crandall, at far left, and Jerry Terrantino, second from right,
and Doc Ingalls,  fourth from left.

All three show up in various guises in the book, like this reference shot for Hickok's wedding to Agnes Lake in Cheyenne: 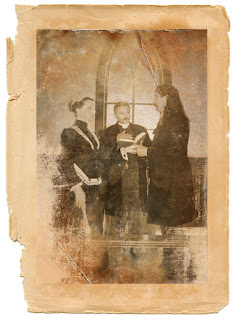 When I get on the last leg of a book project, I stop shaving. Kathy calls it my book ritual, as in "Oh, I see you are in book ritual mode." Here I am with the guy who does all the heavy lifting, Robert Ray, tweaking a spread on Wild Bill that includes the top photo of Hickok at Fort Harker. Also notice we have blown up Wild Bill so you can study the details in his gun rig. Drop dead deadline is next week. Hairy, eh? 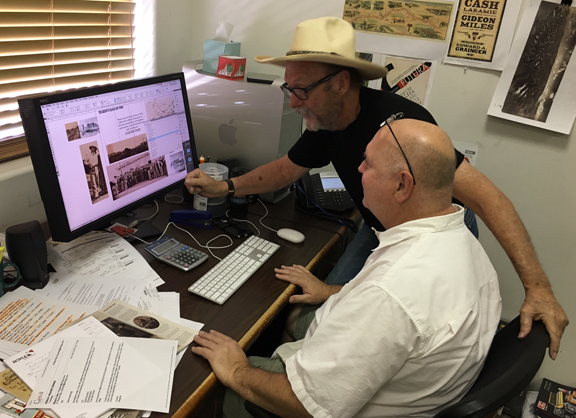 "A great truth is a truth whose opposite is also truth."
—Thomas Mann