The Prince of The Pistoleers Meets The Boy General

October 16, 2017
Buffalo Bill Cody and George Armstrong Custer both had quite a bit to do with Wild Bill Hickok's fame as a frontiersman, but as you might have guessed, those relationships, at least with Cody, are complicated.

The Prince of The Pistoleers Meets The Boy General
It's unclear exactly when Hickok met Custer but on November 17, 1867 General Carr and seven troops left Fort Lyon on their way to join four companies of the Tenth Cavalry, joined the Seventh Cavalry to do battle against the Cheyenne and Oglala Sioux in what became known as the Great Sioux War. Wild Bill was the guide for Custer on the mission, although he was not chief of scouts as some have claimed. That said, both George Custer and his wife Libby were quite fond of Hickok (see Libby's effusive quote, below) and their florid approval added to Hickok's growing image as a Western frontier hero. 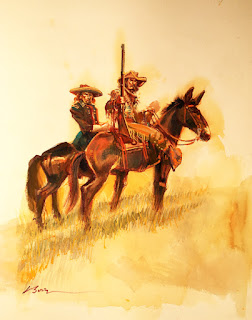 Wild Bill's 'Undaunted Courage'
"Physically, he was a delight to look upon. Tall, lithe, and free in every motion, he rode and walked as if every muscle was perfection, and the careless swing of his body as he moved seemed perfectly in keeping with the man, the country, the time in which he lived. I do not recall anything finer in the way of physical perfection than Wild Bill when he swung himself lightly from his saddle, and with graceful, swaying step, squarely set shoulders and well poised head, approached our tent for orders. He was rather fantastically clad, of course, but all seemed perfectly in keeping with the time and place. He did not make an armory of his waist, but carried two pistols. He wore top-boots, riding breeches, and dark blue flannel shirt, with scarlet set in front. A loose neck handkerchief left his fine firm throat free. I do not all remember his features, but the frank, manly expression of his fearless eyes and his courteous manner gave one a feeling of confidence in his word and in his undaunted courage.’
—Libby Custer 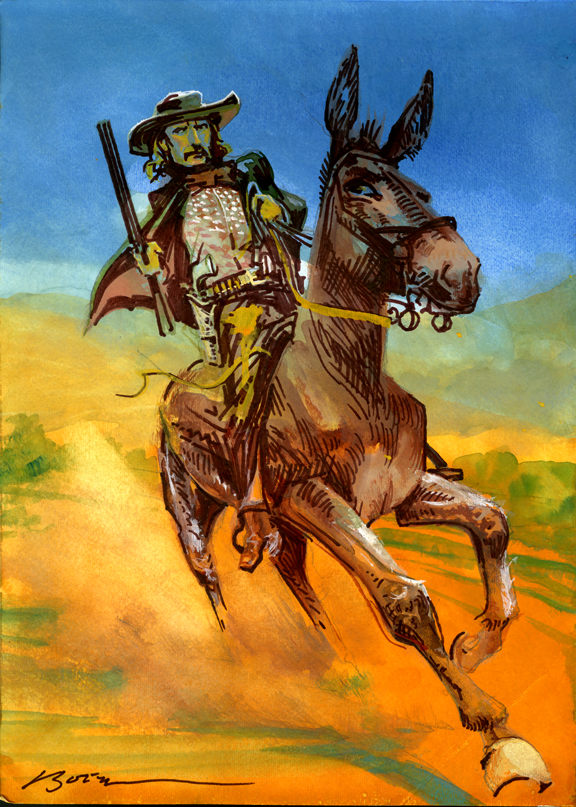 Wild Bill Lanced
The Fifth Cavalry returned to Fort Lyon on February 19, 1869 and Wild Bill acted as a courier, carrying dispatches between Fort Lyon and Fort Wallace. While making a return trip to Fort Lyon, Hickok was jumped by a war party of Cheyenne and in a running fight he was lanced, deep into his upper thigh by a warrior who got close enough to wound him. Somehow Hickok was able to distance himself from the Cheyenne and continued on towards Fort Lyon. He was found the next morning, about a mile from the fort by a group of soldiers out on wood-detail. Hickok had lost his horse and was using the lance which had wounded him to walk with. Suffering from blood loss and half frozen, Hickok was rushed to the fort where Buffalo Bill Cody summoned the post surgeon. Wild Bill gifted the lance to Cody who kept it for the rest of his life.

Bad to The Bone
After a 14-year-absence, Wild Bill returned home to visit his ailing mother. While there it became obvious his lance wound needed to be, ahem, lanced, and so, Doctor Edward Thomas was called on and he came to the house to see what he could do. Lydia Hickok, James's sister, later claimed he would not take chloroform. She also reported that "the doctor made four cuts outward from the wound, making a cross with the lance. The he drew the flesh back and began to scrape the bone. I was holding the lamp and began to feel myself growing feint." Her brother said, "Here, give it to me," and he held the lamp for the duration of the operation, never flinching once. Daily Whip Out: "Bad to The Bone"

With Friends Like These
Although Buffalo Bill always maintained he and Hickok were best friends to the end, Cody let his true feelings show when he sent a letter to Sam Hall, seeking to discourage him from a stage career: "I would never again have another Scout or Western man with me. . .For just as soon as they see their names in print a few times they git the big head and want to start a company of their own. I will name a few." The first name on the list is Wild Bill.

"With friends like these, who needs enemies?"
—Old Vaquero Saying
Posted by Bob Boze Bell at 10:11 AM