Swearing by Swearengen: Is The Cursing In "Deadwood" Historically Accurate?

October 13, 2017
Once and for all, did the miners and gamblers in Deadwood talk as profanely as David Milch has portrayed them in his fictional HBO series, "Deadwood"? 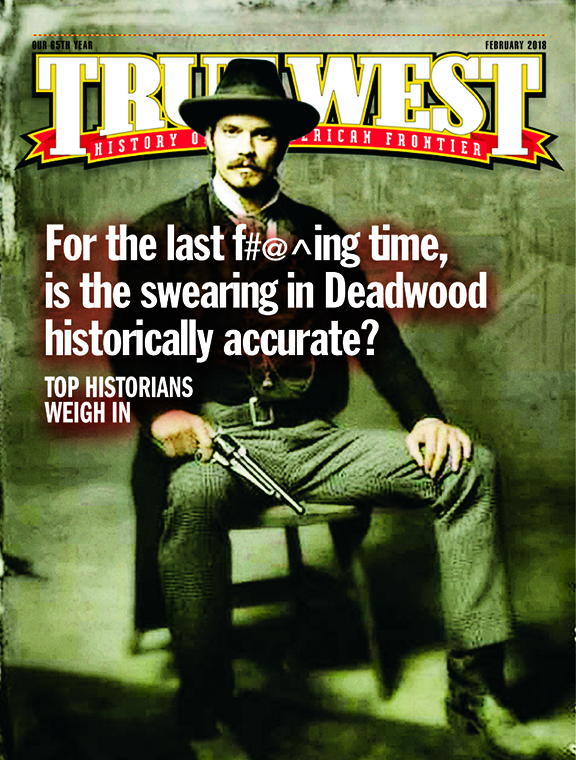 This is a popular opinion:

"I’re read that foul language was prevalent in Deadwood, the town, but came in the form of 'tarnation' and 'gol-darn',” Milch thought these would be laughable to a modern audience, and so the f-bombs (which I also read, didn’t come into fashion until the 1920’s) were used.—Clint Johnson, on Facebook  I personally don't buy the "gol-darn-it" school of thought regarding "Deadwood." I believe all those soft swear words were put into use by mothers and church going people, perhaps in that time, but certainly in the time I grew up (1950s). My grandmother—Minnie Hauan Bell—liked to say, "What in the Sam Hill!" and there are a ton of these replacement swear words. I don't think any self-respecting miner, gambler or gunfighter in the Old West ever walked into a saloon and said, "What in tarnation is goin' on in here?"

I also don't buy the notion that the so-called F-bomb was not "in fashion" until the 1920s. I read a memoir of a young, newlywed farmer's wife from the late 1880s who was supposed to go to town, but the trip got cancelled and so she decided to eat her sack lunch she had prepared for the trip, out in the shade of the barn where her husband and hired hands were working. She didn't announce her arrival, but she was soon shocked and stunned by her new husband's language which she had never heard from him before. Now, this doesn't prove he was using the F-bomb, but it does illustrate that there was a profane vocabulary used by men when there are no women present. And, by one estimate, the local museum in Deadwood touts, the men to women ratio in Deadwood at that time was 100 to one. So I have a strong hunch it was pretty profane, even by Victorian standards.

And, by the way, the term "F-bomb" is a new phrase, coming into vogue in the last decade, or so, underscoring how fluid language is.

At any rate, I put the question out to our contributing editors and staff and here are their thoughts on the subject:Historians Weigh In On Swearing By Swearengen"Did miners and soldiers curse, especially in saloons--of course they did. Did they cuss in front of women and children--never, unless they wanted to get shot by an outraged husband, brother or bystander. Is the cursing in Deadwood overdone--of course it is. Language changes over time--recall the language we regularly heard in the 1950s as opposed to the language today (a total reversal on the commonality of the F-word and the N-word). The language in Deadwood was used for shock value because it was pay-cable TV and they wanted to see what they could get away with and distance themselves from broadcast TV. Its TV, not history."—Paul Hutton, A Distinguished Professor of History at The University of New Mexico"I truly believe that many miners and other resident of Deadwood did, but the Deadwood series went too far. This was, after all, the Victorian era and the words damn and hell were considered offensive! So, no, the whole damned town didn’t drop the f-bomb in every sentence.—Sherry Monahan, Contributing Editor, True West magazine

"Have no emperical data, but if I had to live in such an nasty, cutthroat, dirty town as Deadwood was then, I'd swear all the tine, too,"
—Jana Bommersbach, columnist, and contributing editor, True West magazine"Deadwood got it right--profanity was part and parcel of normal, everyday talk in the mining camps and frontier towns.  The words most often associated with the show--the long ones dealing with carnage knowledge?  I don't think those were used, for the most part (although the "f" word was).  And even rough-hewn miners and cowboys held their tongues a tad around a lady.  Folks wanted to retain some veneer of sophistication and class."
—Mark Boardman, True West columnist and editor of The Tombstone Epitaph

And finally, for all you who think the potty mouths on "Deadwood" are innaccurate, there's this:

Youthful Depravity
The fact must come home to every observer that Deadwood's rising generation is very depraved. Go where we will our ears are greeted with profanity and obscenity from almost baby lips, while our vision is assailed by sights of the most lamentable character. These urchins are not all of that peculiar class known as "hoodlums" for whom ignorance is some excuse, as many of them receive the kindest and best instruction at home, but from too lenient parents who allow their children to wander through the city, visiting haunts of iniquity where are exerted those pernicious influences which sooner or later deaden the most acute sensibility, destroy all sense of right and morality and inspire to an emulation of the worst characters of the town.
--Black Hills Daily Pioneer-January 26, 1881

Every generation thinks it's smarter than the last and wiser than the next. And, by extension, I think every generation thinks they more or less invented swearing. Why is this? Because nobody can remember their grandparents swearing. My grandkids have never heard me swear and if I do my job right, they never will. So these babies get to grade school and hear the inevitable swear words and they are excited and appalled ("My grandparents don't talk like this!") So they assume it's new. I think it's safe to say, this has been going on for about three to ten thousand years, and as long as there are grandparents, kids will grow up believing that swearing is a flippin' new thing.

"I am not young enough to know everything."
—Olscar Wilde