A Cold Ride Into Hell Redux

May 10, 2018
Yesterday, Heidi Osselaer emailed me several pages from the coroner's inquest, held two days after the Power cabin shootout. These eye-witness accounts, taken within 48 hours of the killings, before self-serving slander and family prejudices took over, give us the clearest view of what actually went down out there in the Galuira Mountains on February 10, 1918.

Last night I watched the acclaimed documentary "The Power's War" and then, before retiring I reread the critical passages in Heidi's consummate book, "Arizona's Deadliest Gunfight: Draft Resistance and Tragedy at the Power Cabin, 1918."

I woke up this morning with a clearer view of what happened.

A Cold Ride Into Hell 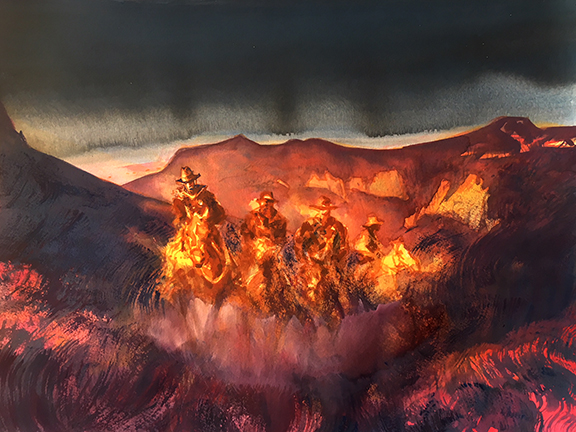 
Who Shot First?
U.S. Marshal Frank Haynes gives us a view into the mindset of the sheriff, who he quotes as saying when they were on a ridge overlooking  what turned out to be the wrong cabin, "It's pretty dark to tackle it." Haynes also quotes another posse member saying, "the dogs might bay us." In other words, if they have dogs (which the Power boys did have) it would be almost impossible to sneak up and surprise their prey.
When they finally reined in on the ridge overlooking the Power cabin, Haynes reports, "We got off of our horses and we pulled off our overcoats. . .Mart had a pair of leather leggings [which he had borrowed from Mr. Upchurch in Klondyke; it was Upchurch who provided the horses, the mule and most of the weapons they were carrying].
The four men descend the ridge to the back of the cabin and split up, with Kane and Kempton going around the south side of the dwelling and Haynes and McBride picking their way around to the north side, which had a narrow space to traverse because of a windbreak built several feet north of the house. Before Haynes and McBride could get into position, Haynes hears Kane hollar, "Throw up your hands." Haynes and the sheriff clear the corner of the house and take in the scene, as Kane yells twice more, "Throw up your hands!" Standing in the doorway is Jeff Power brandishing a Winchester and one of his sons is behind him also armed (John Power). The sheriff remonstrates towards everyone, "Boys, boys, boys," no doubt attempting to diffuse the tense situation, but then Haynes testifies "there were four or five shots all come in a bunch. The first shots come from the house."
The Power brothers, Tom and John, always maintained it was Kane Wooten who fired first, hitting their father in the chest.
Haynes and McBride joined the fight firing into the door. Haynes testifies both he and McBride sought cover around the corner where the windbreak was and Haynes went to the northwest corner to cover that side but when he looked back he saw McBride laying on his back. Haynes flees back to Klondyke.

Now, fast forward to 1958, when Arizona Republic writer Don Dedera took up the Power brother's cause, Dedera relays a new twist on the events: "They say they were asleep when the officers surrounded their cabin. . . They woke when a belled mare ran past the front of the cabin. [Their father], thinking a mountain lion was after the mare, stepped outside dressed in long johns and carrying his rifle. When Kane Wooten shouted, 'Throw up your hands!' he complied, responding, 'Don't shoot.'"

Sound familiar? The cowboys in the Earp-Clanton fight claimed the same thing: the cowboys had their hands up and were in the process of surrendering to the authorities when they were shot down in cold blood.

I don't buy this second version. Granted, both are self-serving and probably about half true. However, it seems clear to me the men in the cabin were awake and armed by the time Kane and Kempton got into position. They did not take kindly to the command to throw up their hands and probably bristled with resentment at the realization of what was about to happen (they were under arrest). Just like at the Tombstone fight on Fremont, all it takes is one hothead—like Doc Holliday—to set the ball in motion. At the Power cabin, Kane Wooten, or John Power, or both, made motions to fight and all the sheriff could do is yell, "Boys, boys, boys. . ."

"They pretty soon give out the notion that they wasn't to be fooled with."
—A neighbor of the Power boys