May 6, 2018
A friend on Facebook, Tony Daniel, told me about a hat style known as "El Humungo" (Spanglish for humungous) and I immediately thought, Wow! Now there's a character waiting to walk out of a Daily Whip Out. 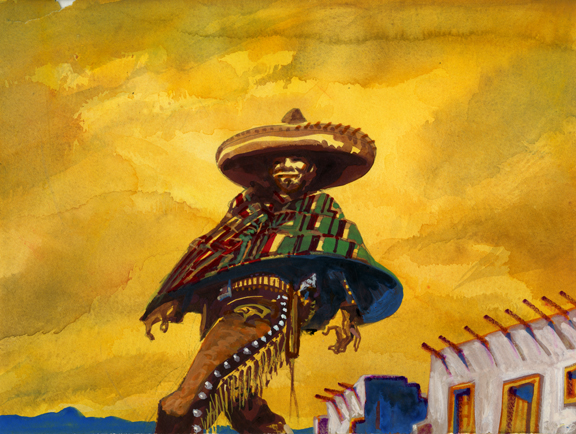 El Humungo was huge. I know that's anglo redundant, but the dude was off-the-charts gigantic. Reports from El Paso in the 1890s, claimed he was ten feet tall and weighed more than an ox. Gringo travelers  on the road south of Magdalena reported seeing an entire mariachi band seeking shade under his massive sombrero and the locals swear that often, when Mister Humungo was moving stolen cattle in the heat of the summer, the entire herd fought to travel in the shade of his giant chapeau. Yes, in northern Sonora he is larger than life, and he wore a hat to match. Down there, El Humungo is a big, fat deal.

"Half the world doesn't know how much the other half lies about it."
—Old Vaquero Saying