May 12, 2018
Kane Wooten yells out, "Throw up your hands!" and Jeff Power says, "Son, stand down. I do not want to fight you or the people you have come up here with. Put your gun down and let's talk."

Just then, Sheriff McBride comes around the corner and says, "Boys, boys, boys, what is going on here?"

Setting his rifle down, Jeff says to the sheriff, "I believe we have a misunderstanding here. Why are all of you here and how may I help you achieve what it is you want to achieve?"

With this simple variation, all of the people involved would have lived and Sheriff McBride would have  attended his daughter's birthday party the next day. That is the outcome everyone there at the Power cabin would have welcomed and cherished. It is an outcome that we all would have preferred. 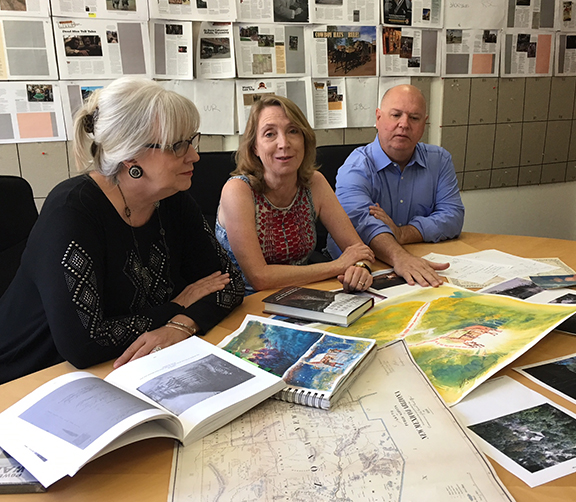 Heidi Osselaer, center, showed up at the True West World Headquarters last Wednesday and showed, Rebecca Edwards, at left, and Robert Ray, at right, how the Power brothers confrontation should have happened.

"There is no history. There is no truth. There is only how the story is told."
—Richard Avedon
Posted by Bob Boze Bell at 10:05 PM