A Nickname for The Ages Plus Where The Hell Is Quick Killer?

October 6, 2019
Nine days to press. Filling holes and taking chances. May upgrade the San Jeronimo story to this:

A Nickname for The Ages
Imagine your given name is He Who Yawns and you are battling your enemies in Mexico, and as you are about to dispatch a pleading soldado, who is on his knees, he suddenly blurts out, "San Jeronimo!" Turns out Saint Jerome is the patron saint of Please Save My Ass. Later, around the campfire, one of your fellow warriors mocks the dying soldado and mimics his cries, "San Jeronimo! San Jeronimo!" This becomes a nickname to some of your tribe who begin to call you "San Jeronimo" when they want to rib you. Later, when the Americans hear about this, they change the pronunciation because some anglos dislike the Spanish, soft "j" (which is pronounced as "Hay-ron-imo") and they change the "J" to a hard "G", as in Geronimo, and the rest is history. 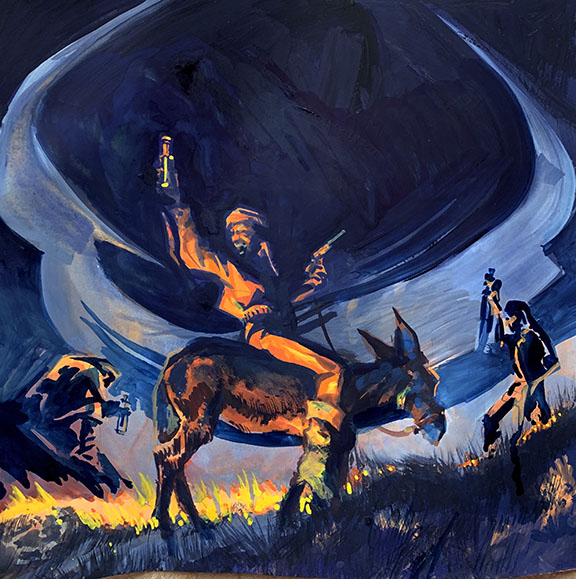 Daily Whip Out: "Drunk As Lords"

Drunk As Lords
Before dawn on March 28, 1886, Alchesay and Kayatennae reported to General Crook that the Tombstone bootlegger, Bob Tribolet, was selling whiskey to the Chiricahuas and they were getting dangerously drunk. Captain Bourke investigated and found riderless mules wandering aimlessly near Cajon Bonito Creek and then he came across Geronimo and four other drunken Chircahuas mounted on two small ponies. Geronimo hugged Bourke and asked if he had written down that he was "injun gadin," a good In-din. Bourke returned to Crook and recommended to the general to have Tribolet killed "as a foe to human society, and, if you don't. . .it'll be the biggest mistake of your life." Crook rejected the advice and instead, ordered a company of men to observe Tribolet. Although Bourke's advice was severe, the outcome was exactly as he predicted.

In the morning, in a drizzling rain, a very hungover Geronimo and Naiche slinked off to go on another killing spree and Crook lost his job. For the rest of his life he would consider the Embudos debacle the worst mistake of his career. Many others to this day, agree. 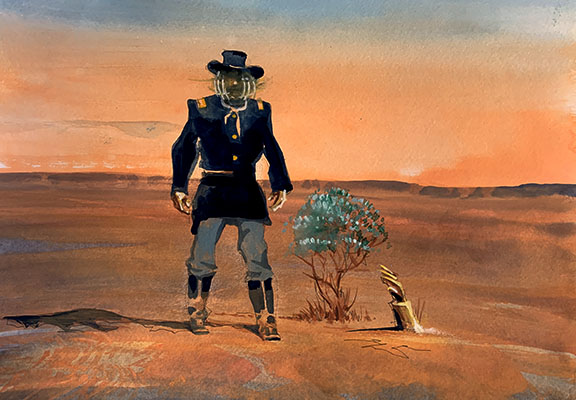 Daily Whip Out:
"Where The Hell Is Quick Killer?"

This is a little painting depicting Captain John C. Cremony's anecdote about the Apache Quick Killer demonstrating how good he could hide in plain sight. They were standing on a desert plain with only a small bush next to them. Quick Killer asked Cremony to walk ten steps away. When the Captain did this and then turned around he could not see Quick Killer. He walked back to the bush and walked around it a couple times and finally called out to Quick Killer who proceeded to jump up from the base of the bush where he had covered himself with dirt and sod. Now THAT is hiding in plain sight!

"I don't try to jump over seven-foot-bars. I look around for one-foot-bars that I can step over."
—Warren Buffet