Death of A Doppleganger

There is some controversy about Chatto's death, with one historian believing in a conspiracy theory about some unnamed Apaches at Mescalero putting a hit on him for being a "traitor." 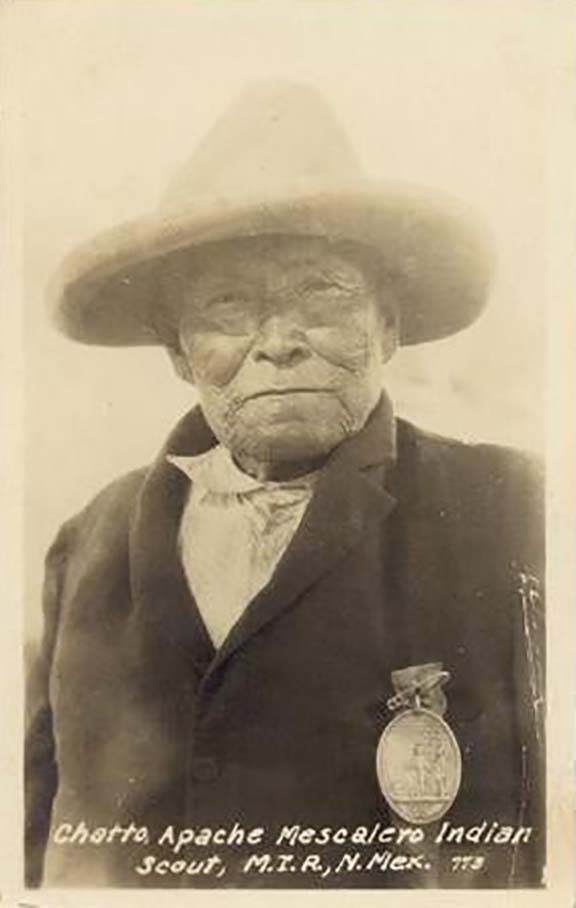 I always thought the conspiracy theory stuff was far fetched, but I couldn't prove otherwise, so, I had to put the clarifier in my forthcoming book that there were other versions of his death.

Thanks to Gay Mathis, I now have Chatto's death certificate: 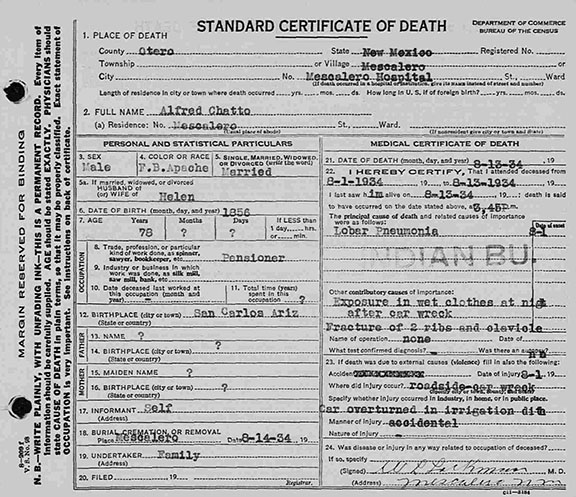 A couple of interesting details: his name was Alfred Chatto, and he died of "Lober Pneumonia" from "exposure in wet clothes at night after car wreck. Fracture of 2 ribs and clavicle." Cause: "car overturned in irrigation ditch."

One fly in the ointment: I have Chatto being 93-years-old at the time of his death but the death certificate says he was 78. Hmmmm.

Death of A Doppleganger
In 1913, when the Chiricahuas were allowed to go to the Mescalero Reservation in New Mexico they chose to live at White Tail which has timber and good grazing, but Chatto picked a spot at the top of Apache Pass, about ten miles away. Even though it didn't have water, he was tired of being blamed for everything and he believed if his kin really wanted to be mad at someone they should have directed their anger at Geronimo, and to be honest, some did. In his 78th year, Chatto was drinking liquor with other Apaches up in a canyon near his home and when they drove down the canyon, the car went "turtle up" in an irrigation ditch and he got pneumonia and died on August 13, 1934. His death mirrors almost exactly how Geronimo died. The two fought together, posed together, opposed each other and died the same way. Bullets couldn't kill them, but alcohol did. Chatto and Geronimo:
they posed the same and died the same

"History doesn't repeat itself, but it does rhyme."
—Mark Twain