Five Days to Press: Trading Up, Doubling Down

October 10, 2010
Five days to press. This is the hectic and super-crazy phase of publishing my style of books where I go through the layouts and kick out anything that seems weak and trade up for something better. Like this: 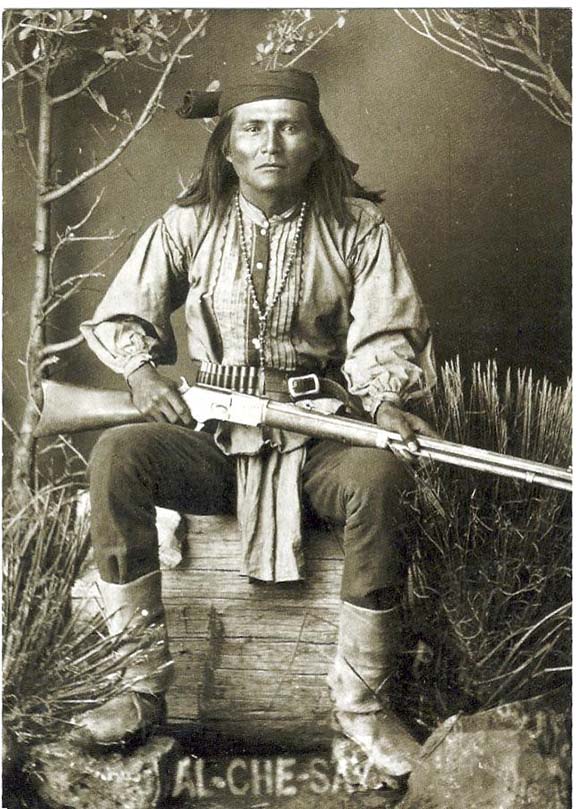 Alchesay: 1853-1928
A noted chief of the White Mountain Apache Tribe, William Alchesay received the U.S. Army's highest decoration for bravery, the Medal of Honor. In spite of being on opposing sides, Alchesay was friends with Geronimo until the day he died. Alchesay also met and advised three U.S. presidents and late in life he became the godfather to the son of the Whiteriver Lutheran pastor, Arthur Alchesay Guenther (1923-2012). It was A.A. Guenther, who, in turn, spear-headed the move to name the Whiteriver school, Alchesay High School, which it is called to this day.

I had the honor of meeting Pastor A.A. Guenther about ten years ago, and, in fact, The Top Secret Writer and myself, spent time at his house going over old photos and talking about the Apaches (he was good friends with one of Mickey Free's daughters). He told us about his father, who preceded him as a pastor to the Apaches at Whiteriver, who once showed up at a remote dwelling in the middle of the night, for the birth of an Apache baby, and discovered the baby had six fingers on one hand. He knew that the medicine man, who hadn't arrived yet, would kill the baby (the old medicine men were quite superstitious and routinely killed twins) so he took the baby outside, pulled out his pocket knife and heated the blade in the fire and cut off the finger. The baby survived and grew up to be a noted member of the tribe and lived a long and happy life.

"Being right half the time beats being half-right all the time."
—Malcolm Forbes
Posted by Bob Boze Bell at 8:51 AM