Victorio And The Cockfighters

October 14, 2019
One day to press. Last day to cull the weak stuff and add in better stuff. For example, Ed Mell had someone drive down from his cabin in Prescott, with this photograph, which Ed took at Janos back in March of 1996. 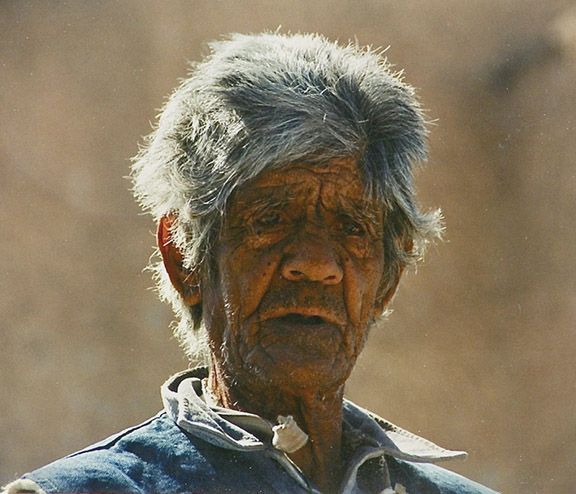 Imagine the things this Indio Viejo (old In-din) had seen in his long life. I have a close-up on Victorio as well, but this one has much more detail. Robert Ray and I will decide this morning if we should trade out the other version for this one. These are the kinds of decisions we make as the clock ticks down.

By the way, several people have asked me if Victorio had any good stories, or did I get to interview him about the history of his long life? Well, the truth is, he rode up, he was speaking in Spanish, and our guide was translating and at one point Victorio said something to the effect that his "verga" didn't work anymore. Verga is Mexican slang for penis. I think it was a joke, but the whole conversation was lost in translation, if you know what I mean, and I think you do. At the same time, several locals were working on a wounded rooster and they were trying to get a cockfight going (which is probably the reason Victorio rode into town) and we had two Japanese women in our tour group and one of them came over to me and she was weeping. "Mr. Bob you have to get them to stop this!" So I calmly went over and told those Mexicans to stop the cockfighting business because it offends the American and Japanese people in our tour group, and they meekly handed over the birds and I drove them to the nearest animal shelter.

Are you kidding me?! I did not attempt to interfere in a six-thousand year old tradition in a country where I was a guest AND a gringo.

So, that is the true story of what happened when a gringo Zonie tried to get the back story on an old In-din who claimed to be the grandson of Victorio. I should probably add that, in my experience, this is how most history is recorded. Verdad? Or, verga! Choose your poison.

Yesterday I tweaked a few sidebars that needed it.


The Cowboy President
There is probably nobody who had more to do with Geronimo becoming a national celebrity than the so-called Cowboy President, Teddy Roosevelt. The well-born, polo-playing Phi Beta Kappa Harvard graduate who launched himself out west after the tragic death of his mother and his wife, became a historian, a leader of the Rough Riders and he even won a Nobel Peace Prize. Oh, and the teddy bear was named after him. He then got elected to the New York State Assembly in 1881, at the young age of 23, and ended up as vice president, and after the assassination of William McKinley, Teddy became the youngest president in U.S. history, at 42. Oh, and he loved Old West history and the characters who made it wild. He appointed Pat Garrett to a post, invited Bat Masterson to the White House and, for his 1905 inaugural, he invited five chiefs to ride in the parade. Geronimo was one of them.

Teddy Roosevelt got 35,000 people to participate in his inaugural parade, including six In-dins: Quanah Parker who represented the Comanche, Buckskin Charlie of the Utes, Hollow Horn Bear and Amerian Horse of the Sioux, Little Plume from the Blackfeet and the Apache warrior Geronimo.

All Eyes On The Mounted Warriors
On March 4, 1905 Teddy Roosevelt was about to enjoy his first inaugural parade (he initially took the oath of office after the 1901 assassination of President William McKinley). The parade included West Point cadets and Army regiments, including the legendary 7th Cavalry. After several divisions of these came by, suddenly, and dramatically, six In-dins on horseback came into view and everyone in Roosevelt's box stood up.

Flanking the chiefs were 350 cadets from the Carlisle Indian Industrial School in Pennsylvania marching in lockstep. This alignment was intended to showcase the progress that the wild In-dins of America had made and to lllustrate that they had left the old ways behind and had successfully been recast in the image of the dominant culture.

The cadets received a few passing mentions in the newspapers but nobody bothered to photograph them. All eyes were on the six chiefs. And, in reality, Geronimo had arrived on the American scene for good.

"Oh, God, now that damned cowboy is president of the United States."

—Senator Thomas Platt, on hearing that McKinley had been assassinated