Geronimo: Ten Wives for One Brother

October 3, 2019
Geronimo didn't do anything halfway, including getting married. One of his biographers, Angie Debo, documented nine wives, but then Lynda Sanchez discovered a tenth wife! 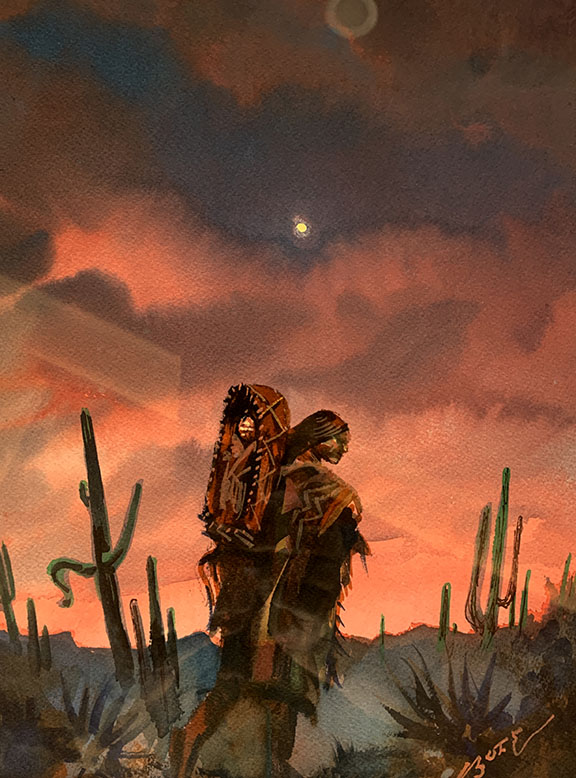 Daily Whip Out: "The Tenth Wife"

Let's take a closer luck at the record as it relates to Geronimo's better halves.

1. Alope, a Nednhi Chiricahua married Goyathlay in 1840 and they had three children. She and the children were killed at Janos, which set Goyathlay off on a reign of terror that lasted until 1886, when he surrendered for the last time.

2. Chee-hash-kish, a Bedonkohe Chiricahua married Geronimo in either 1852 or 1853 and she had two known children, one of them Chappo.

3.  Nana-that-thtith, a Bedonkohe Chiricahua, had one child, but both were killed by Mexican troops.

4. She-gha, a Nednhi Chiricahua married Geronimo in the spring of 1861. She died in captivity and is buried at Fort Barrancas cemetery in Pensacola, Florida

5. Shtsha-she, a Bedonkohe Chiricahua, became the third wife but drops out of the records by 1885.

6. Zi-yeh, the daughter of Pine Pitch House (the White Apache), married Geronimo in late 1879 and had two children, a son named Fenton and a daughter named Eva. She died of tubular lupus in 1904

7. Ih-tedda, a young Mescalero Apache kidnapped by Geronimo's warriors and who he "married."

8. Sousche (Mrs. Mary Loto) was a widow with a grown son. They married for a year, but she left Geronimo in 1906 while he was working on his book. Okay, I get this one.

9. Francesca had been captured in Mexico and held as a slave until she escaped and on the 600 mile trek back to the Apache homeland she was attacked by a mountain lion and nearly scalped by the wild cat. No man wanted her but Geronimo admired her courage and took her for his wife.

10. Sunsetso, also Old Lady Yellow, or, Azul (Spanish for blue). She was a widow and former Mexican slave who married Geronimo in 1907.

Some researchers insist there were a dozen wives, but the above ten are documented. Lynda Sanchez also points out "if a woman had lost a husband, or was basically alone without support from a male member of the band, then Apaches would take them on as a wife.  Their system was really practical and not based on the love thing like we are so infatuated with in this country.  It was all a matter of survival."

"What's love got to do, got to do with it?
What's love but a second hand emotion."
—Tina Turner
Posted by Bob Boze Bell at 9:16 AM