Dancing In The Moonlight

I am reading a very cool book, "The Free World: Art And Thought In The Cold War" by Louis Menand and basically it puts into perspective the world I grew up in. We get the causes of the Cold War, after the end of WWII, then into the fifties when New York takes over the world art scene (short version: Hitler drove all the Surrealists out of Europe and they sought refuge in America and brought their bold concepts with them) to the rise of Rock 'n' Roll and the arrival of The Beatles. One amazing story I did not know is that with the payola scandal, there were three Congressional investigations and in one of them "two prominent targets of the hearings, held in 1960, were Alan Freed and Dick Clark. Freed was uncooperative, and he was fired by WABC (where he had moved in 1958), indicted, and fined. He died, broken and alcoholic, in 1965."

"Clark was cleverer. His conflicts of interest were far more extensive than Freed's. He acknowledged a financial stake in more than a quarter of the songs he played on his show between August 1957 and November 1959 (and that was probably a low estimate). But he escaped sanctions after selling his stake in several music publishers, a talent agency, a record-pressing plant, record companies, and other enterprises. He remained host of American Bandstand until 1987."

When I read this, I put the book down and said out loud, "It's all a dance." Or, as Kenny Rogers put it, "You've got to know when to hold 'em and know when to fold 'em." Freed fought the feds and they crushed him. Clark divested his holdings and, ahem, danced away to fight another day.

Of course, both men were victims of a witchhunt because old people hated rock and roll and wanted it destroyed. The so-called payola scandal was overwrought and mostly political theater. Not only did Clark survive, continuing his Bandstand gig but he then expanded his career by going to Hollywood, where he became a sucessful game show and awards show producer.

One ironic note on the story is that my partner, Ken Amorosano, got his start stuffing envelopes for Dick Clark in Hollywood back in the eighties. Ken tells great stories about how much he learned at the Master's knee. So the next time you read a True West magazine, you can thank Dick Clark. 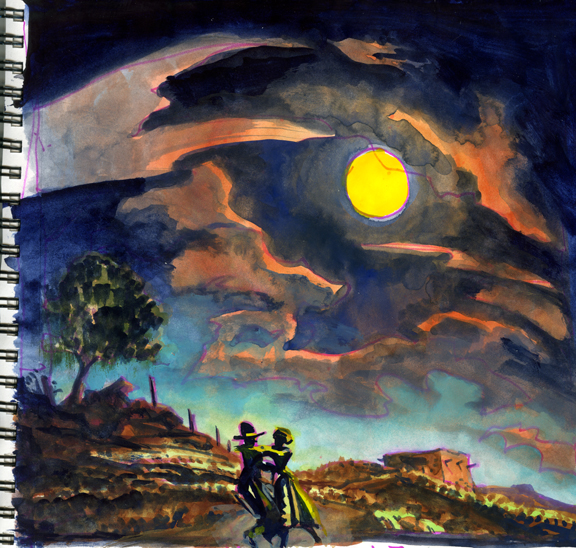 "Tesuque Dancers In The Moonlight"

In the end it's all a dance. Relationships, politics, show biz, art, you name it. It's almost impossible, but we try to move in unison to the beat and not get squashed in the process.

"Everything is theoretically impossible, until it's done."