Homestretch on Wyatt and O.K. Corral at 140

Well, I got caught in a side trip that got out of control. I had planned on finishing the Women of the Wild West cover last weekend, but there was concern from one obstinate holdout of our team about the Wyatt Earp cover Dan did ("tired image") and, well, three studies and two painting attempts later, I ended up here this morning. 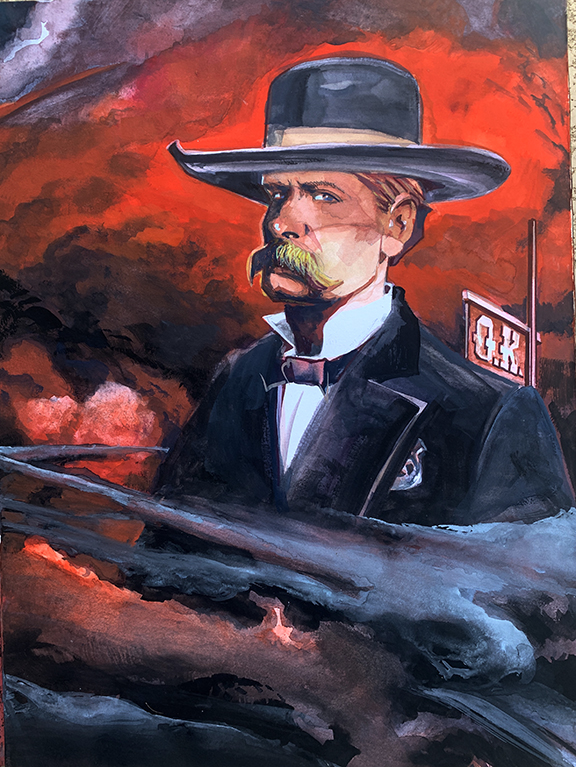 "When The Smoke Cleared

We Could Finally See The Man"

More answers to the question, Is Wyatt Earp still a hero?

"It’s easy to get bogged down in the weeds with someone like Wyatt Earp. Is he a hero? Sure. A villain? Probably. He embodies everything we Americans like about ourselves, our history and our so-called 'great men.' And everything we don’t like, too. There’s a little dirt on most American 'heroes' and Wyatt Earp is no exception."

"Although Wyatt Earp demonstrated toughness and bravery, he was really only out for himself and his family. Having the cover of being a law enforcement officer (which in many cases allowed him to collect fines and taxes and license fees) provided perfect opportunity to run his grift. He probably enjoyed free coffee and drinks around town in addition to a salary and whatever he could skim."
—Greg Scott, Nogales, Arizona

Just got this from researcher extraordinaire Janice Dunnahoo in New Mexico.

ARIZONA INDEPENDENT REPUBLIC
Phoenix, Arizona, August 21, 1939
Yes, the wisdom of our forebearers sometimes stuns me. This is a perfect coda to our current angst on whether Wyatt deserves to be called a hero.
"Perhaps it would be best if all the old Tombstone folk could be remembered as heroes."
—The Arizona Independent Republic, 1939
Posted by Bob Boze Bell at 11:01 AM