August 2, 2017
My daughter is in the financial sector and we talk quite a bit about adapting to shifting trends,  in our respective fields. I mentioned to her in an email that I wasn't really impressed with German beer and here is her reply:

"Ah, yes, the German beer thing! I heard a great piece on NPR about that. Apparently all German beer is the same (or the most well respected ones are the same) because they have been using the same ancient and purist brewing methods for a century. They have not changed the recipe in that amount of time so they are true "purists" meaning no weird shit in their beer (berries, etc) like we have over here in the US. The only difference between the different brands is marketing! What?! That's wild. Well, with the whole micro brew movement happening in the US the demand/taste for the purist German beer is declining so there is a huge debate happening in Germany - do they stick with their purist ways (which is really boring) or do they break a century old way of doing things to follow the fads?? Doesn't this sound like the very same conflicts we have discussed In both of our industries? Stay the course OR adapt or die. Interesting!! Fascinating."
—Deena C. Bortscheller

Speaking of beer, we lost a cool cat this week who looked good sitting at a bar drinking one: 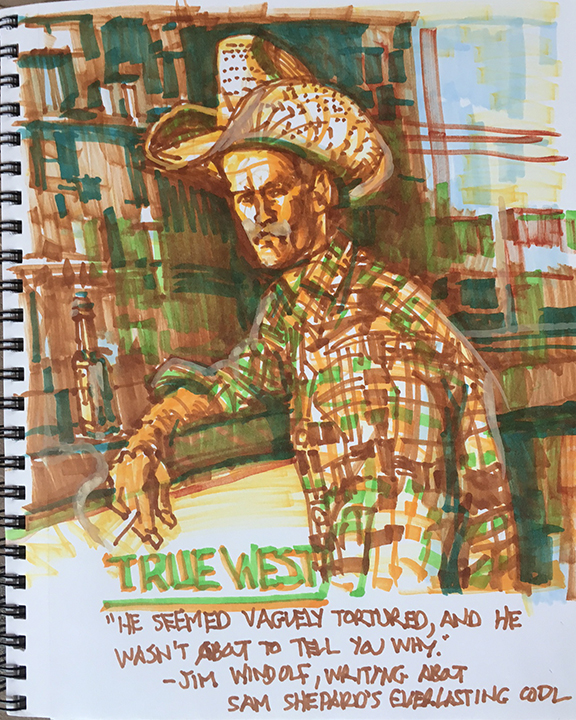 And, by the way, Sam had to get clearance from True West magazine to use the title for his riveting play. This was before we bought the magazine. The guy was definitely a thinker. Here are three great quotes from the writer, actor and director:

"The funny thing about having all this so-called success is that behind it is a certain horrible emptiness."
—Sam Shepard
"Love is the only disease that makes you feel better."
—Sam Shepard
"I hate endings. Just detest them. Beginnings are definitely
the most exciting, middles are perplexing and endings are a
disaster. The temptation towards resolution, towards wrapping
up the package, seems to me a terrible trap. Why not be more
honest with the moment? The most authentic endings are the
ones which are already revolving towards another beginning.
That’s genius."
—Sam Shepard