France & Germany In The Rearview

August 11, 2017
Going through my sketchbook done while I was abroad last month. Here are some of the pages in no particular order as I bounced around France and Germany on high speed trains and on foot. 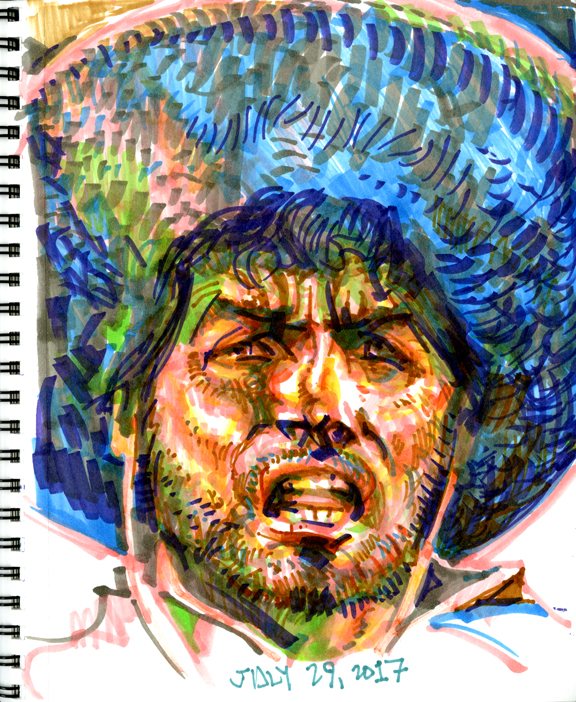 Daily Whip Out: "A German Version of A Vaquero"

I bought a whole bunch of German Western graphic novels and they are being shipped to me even as you read this (I quickly ran out of space in my carry on). This vaquero is from a comic called "Mac Coy," which had some very cool vaquero drawings in it.

Of course, we went to the Louvre when we were in Paris and I marveled at the date on a certain armless statue. 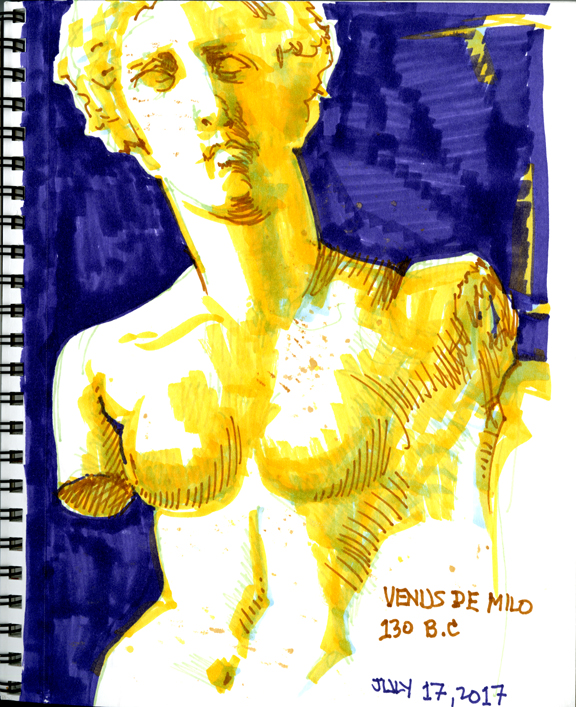 In the dining room of our hotel in Germany was this dark painting of a knight setting forth in front of a tall cliff top castle and I couldn't resist copping the basic design and putting it a little closer to home, as in my home on the desert Southwest. 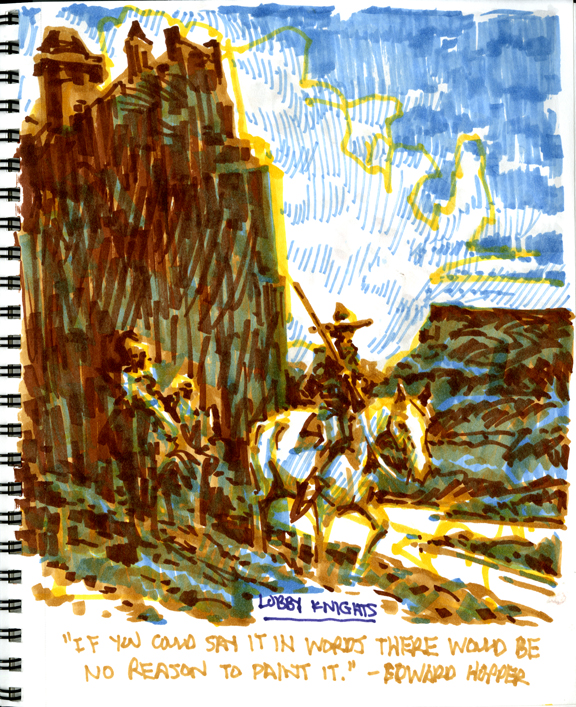 The German graphic novels lean heavily towards the movie tropes, as in this sequence. I really dug the third panel where the pistol fires and bucks, and the flash is below the barrel as it would be in real life. Very cool and very effective: 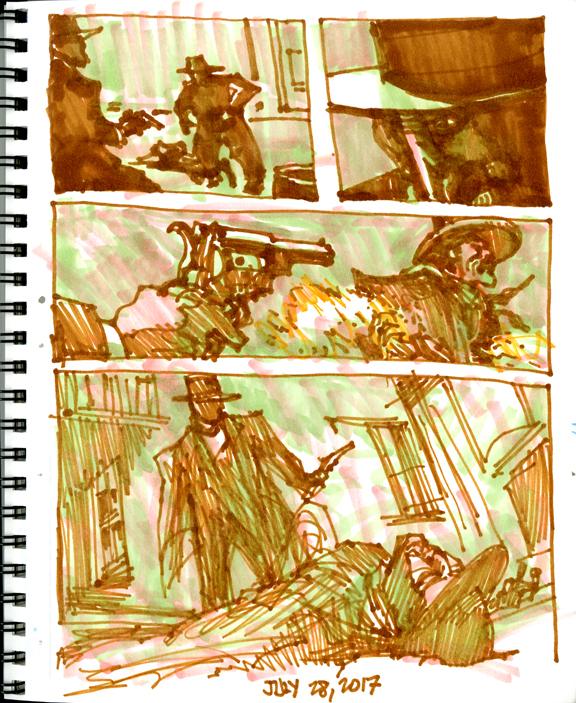 In Germany I was struck by how the towns are contained—the downtown is the downtown and the country is the country. They have kept the two separate without the willy nilly urban sprawl that devastates so many American towns. My hometown of Kingman comes to mind. The downtowns in Germany are lively and people are out walking—yes walking—with numerous outdoor cafes. How did they bypass the bypass, I want to know. 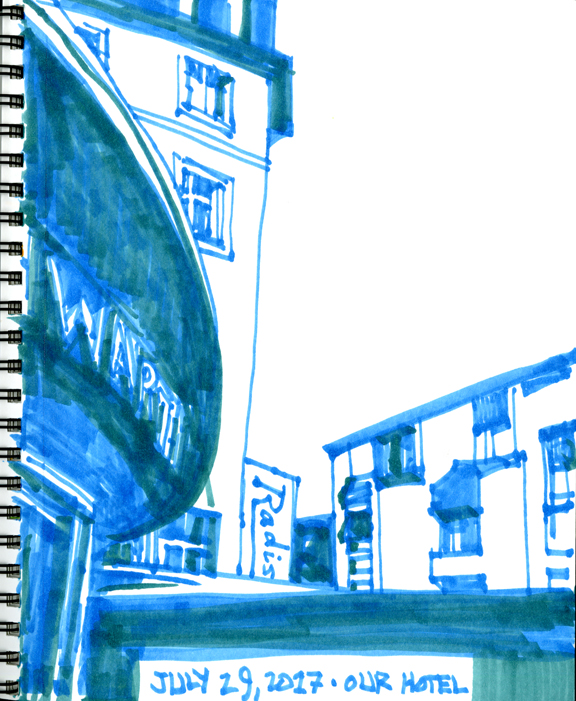 Daily Whip Out: "The Schwarzer Bock Hotel in Wiesbaden, Germany"

Our hotel, above, is very historic. Goethe (pronounced Ger-Teh) took in the bathes in the basement in 1818! The nearby Burger King is on the ground floor of a three centuries old building. Just crazy amazing.

Meanwhile, the other thing that impressed me so much is that the trains are so clean and efficient and they go everywhere, on time. I don't get it. We OWNED the train, we improved it, we had the tracks, what happened? I know, I know. We chose the car, we moved to the suburbs, we left devastation in our wake. I wish we had that one back. 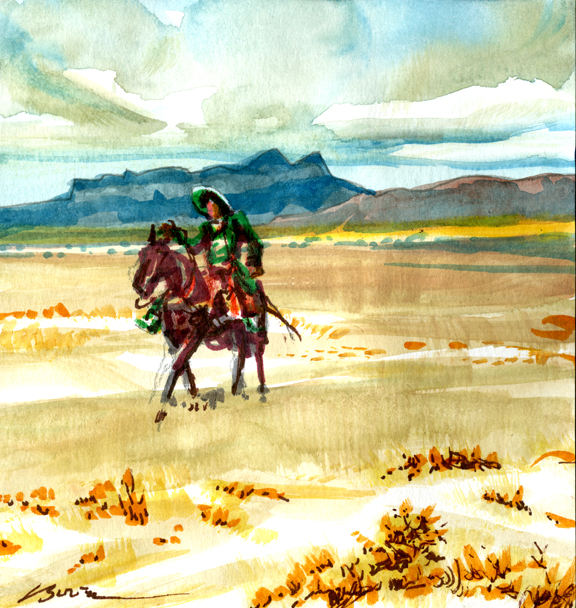 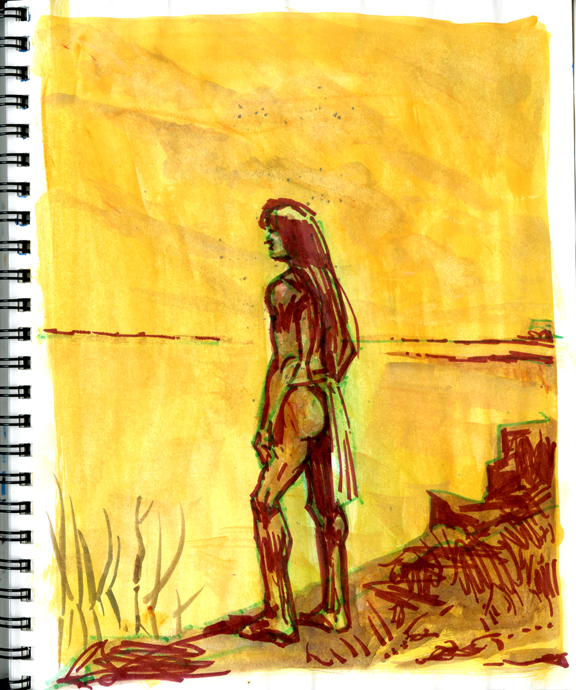 Daily Whip Out: "The Mojave"

This is from an Edward Curtis photograph. 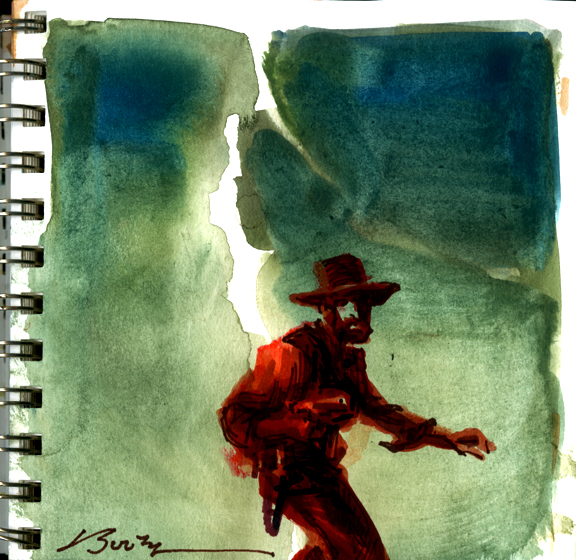 Daily Whip Out: "Quick As Lightning"

Loved going, really loved coming home. I dig this desolate country and would be hard pressed to live anywhere else. It's so hot and gritty,  but those are just two of the things I love.

"The single most exciting thing you encounter in government is competence, because it's so rare."
—Daniel Patrick Moynihan
Posted by Bob Boze Bell at 2:06 PM