August 30, 2017
If you know anything about the story of Wild Bill Hickok you no doubt are aware that Calamity Jane is buried right next to the world's first gunfighter. Thanks to Jane—and a couple dozen books and movies—the two are linked forever as romantic partners.

Although it's not true, that they were a romantic couple, it certainly qualifies as a calamity, if you like your history straight.

Let's start with the real Mrs. Hickok. She is certainly worthy of respect.

Full disclosure: I rendered this, utilizing a photograph of Lake's daughter Emma, who Agnes groomed to be an equestrian star as well. There is a strong likeness in photographs of the mother and daughter and I wanted to illustrate Agnes in her prime. Unfortunately, the surviving photos of Mrs. Hickok are not flattering, and, in fact, I believe contribute to her being erased from the legend of Wild Bill. More on that in a bit.

Thanks to the excellent research and scholarship by Linda A. Fisher and Carrie Bowers, the story of Agnes Lake Hickok is finally fleshed out in their fine book, "Agnes Lake Hickok: Queen of the Circus, Wife of A Legend," which I highly recommend. Here are just a couple of the early highlights:

May 1, 1846
A young farm girl, age 19, from Ohio runs off with a circus clown. Mary Agnes Mersmann and William Lake Thatcher apply for a marriage license in Jefferson Parish, Louisiana. Thatcher is a long time circus clown and is billed as a "Shakespearean Jester" with the Great Western Circus, among other traveling "mud shows." So called because these traveling shows used wagons and the roads were so bad they invariably got stuck in the mud.

April 26, 1847
Mrs. Agnes Lake performs her circus debut on the "slack wire" (The wire is not pulled taut, like on a tight rope, which allows the wire to "hang like a shallow crescent" while the artist performs stunts while the rope swings in great arcs.) with the Rockwell & Company's New York Circus.

March 25, 1848
In front of a hometown crowd in Cincinnati, Mrs. Agnes Lake performs on the slack wire. According to her brother Joseph, she only "fell off 3 times, but on the whole she made a very favorable impression on the audience. She had presents thrown in the ring to the value of $40." Oh, and she was also pregnant! 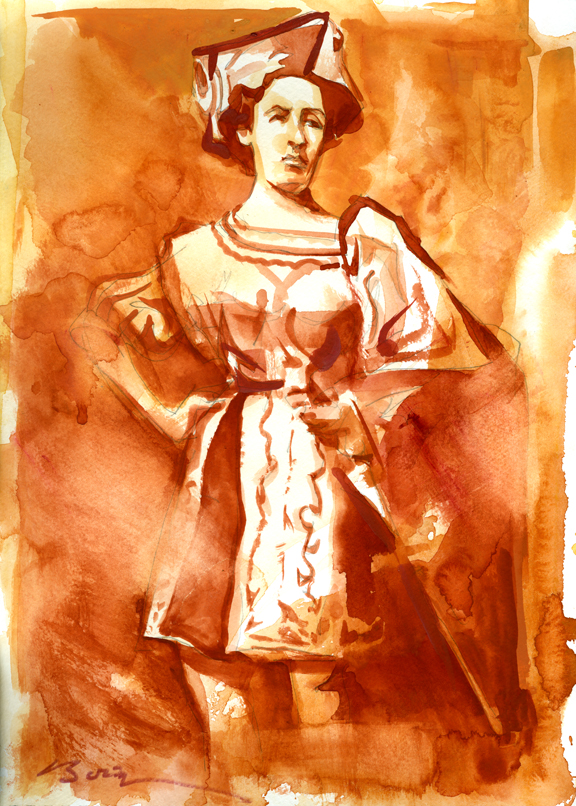 Daily Whip Out: "Agnes Lake As Mazeppa" From a photograph

Agnes toured Europe in a stage play called "Mazeppa" and trained all of her horses to perform in it. After her husband's murder, the talented widow took over the circus and ran it herself. She met Hickok when she brought her circus to Abilene, Kansas, on July 31, 1871. Wild Bill was the town marshal and Agnes needed to pay him the license fees for public entertainments and arrange security. Nothing romantic happened on this first meeting, but she was quite taken by the handsome law dog. Four years later, and only weeks before his assassination, the two were married in Cheyenne, Wyoming.

So, how did Calamity Jane successfully bump Mrs. Wild Bill right out of the picture? It's an ugly story, but I'll cover that when we get there.