A Headstrong Boy Heads Out West

September 1, 2017
Thanks to the late, great Gus Walker we have a wonderful map of Wild Bill Hickok's meanderings throughout the West. Really looks great in the layout for the book. Damn, I miss that boy! Anyway, here is the copy that will go with the map.

A Headstrong Boy Heads Out
Born on the edge of the frontier, in 1837, young James Hickok bragged to his sister Lydia that someday he would do things Kit Carson never "thought of doing." After the death of his father in 1852, James stayed close to home to help his mother and her large brood (five boys and two girls), but he was chomping at the bit to head out West as his older brother Oliver had done in 1851. James and his brother Lorenzo finally got a chance to light out for the territories in June of 1856, but when they arrived in Saint Louis, they received an urgent letter from their ill mother, calling them both home. Like a good son, Lorenzo returned, but the headstrong James pushed on, defying his mother's request. It would be some time before he returned. 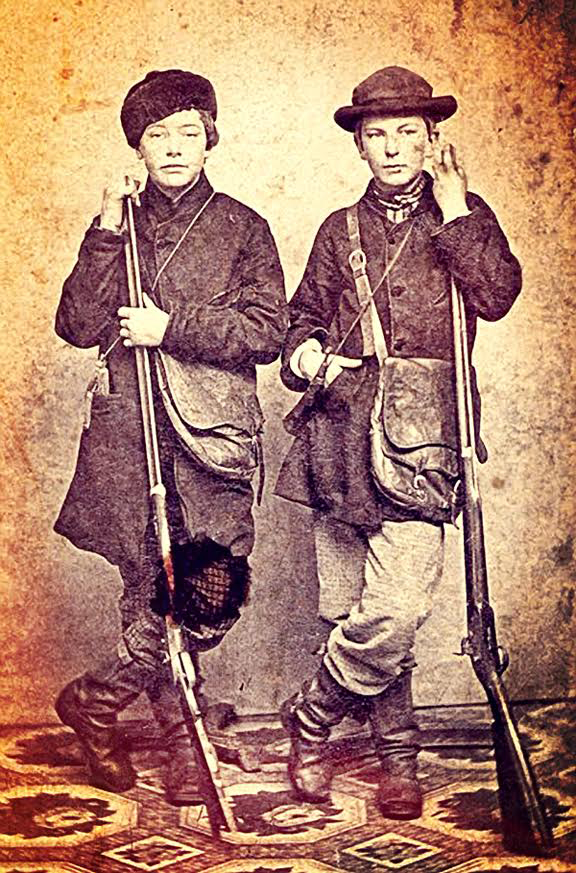 Two boys on the hunt

A pretty good representation of what the young James and Lorenzo Hickok probably looked like on their first trip away from home. For James, there was no turning back.

"Save your powder, Bill, for the death-hug's a-comin'!"
—George Ward Nichols, a prophetic warning to Wild Bill in the Harper's account of the McCanles fight