September 20, 2017
Wild Bill Hickok excelled at many things. By most accounts, he was a crack shot and an excellent rider. He worked as a wagon boss and freighter, and for the Pony Express, although he was too big to qualify as a rider. He also took turns as a scout, a spy, a lawman and he even tried acting.

On a whim and a promise from his friend, Buffalo Bill, James Butler Hickok tried his hand at striding the boards. 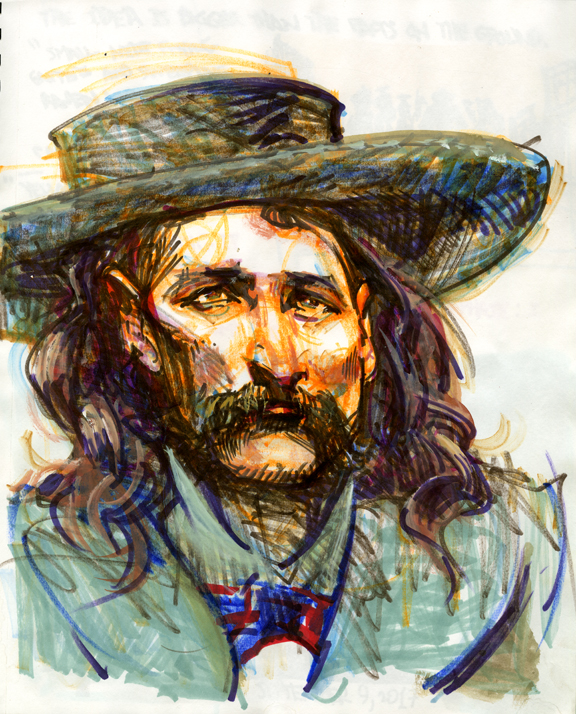 It was William F. Cody's idea to put on a traveling show featuring "The Combination" of Buffalo Bill, Wild Bill and Texas Jack. Cody describes what happens when Hickok shows up in New York to join the show: "Bill arrived in New York after dark, and being unacquainted with the city—this being his first visit there—he took a hack, instructing the driver to take him to the Metropolitan Hotel. Upon arriving at the house, Bill asked the driver his charges.

"Five dollars, sir," was the reply.

"And you wouldn't accept anything less, would you?" asked Bill.

"No sir, that the charge and nothing less."

"Bill then handed the driver five dollars, at the same time striking him a blow in the face that sent him plowing up the settlings in the gutter. A policeman very soon came after Bill, but bail being furnished by me, he was kept out of the Tombs; but the next day I paid a fine of $10 for him. This was his first experience in New York."

At the hotel and on the road to their first gig, Cody tries to school Hickok in the art of being on stage and how to move and say his lines to best effect.

September 8, 1873
Inexperienced and nervous, Wild Bill steps out on a stage for the first time in Williamsport, Pennsylvania. He is appearing, along with Buffalo Bill Cody and Texas Jack Omohundro, in a play written by Fred G. Maeder, called, "The Scouts of the Plains." The show bill gives us a pretty good idea of the plot:

The stories of Wild Bill's  discomfort on stage are legion, but the following one is a good example of his apparent inability to "pretend": Two scouts are on stage swapping yarns. A bottle of whiskey is passed between them and as each takes a swig the actor is supposed to "spout a blood curdling yarn." When it's Wild Bill's turn, he takes a swig, looks horrified, spits out the liquid and yells, "cold tea don't count—either I get real whisky or I ain't tellin' no story!" Allegedly Cody sent out for real whiskey so the show could continue. This seems almost too precious to be true, but there are others as well.

In spite of Wild Bill's discomfort, the reviews are good: "We can only say today that Wild Bill, buffalo Bill, Texas Jack and [Guiseppina] Morlacchi drew an immense audience to Music Hall last evening. The applause was frequent and hearty and Morlacchi's dancing aroused immense enthusiasm."
—The Portland, Maine Advertiser

The above mentioned Miss Morlacchi is an exotic dancer from Milan who came to the U.S. in 1867 and soon became the toast of the town (New York). Although she was squired around Manhattan by rich bachelors, including Jack Fisk, she fell in love with Texas Jack and they eloped to Rochester, New York to get married on August 31, 1873

Coming Next: Wild Bill burns the legs of Big Thunder and Bear Claw

"Turn the blame thing off!"
—Wild Bill Hickok, to the lamp man