September 7, 2017
Honking on book. Got up this morning and took a swing at the subject at hand. 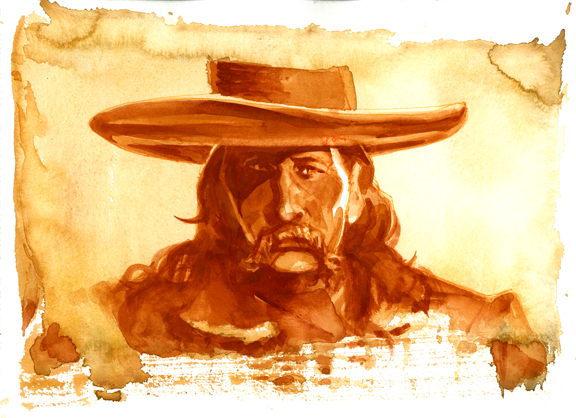 Hair Wars
As I was painting this, I flashed back to the 1960s when wearing long hair was a defiant and dangerous life style choice. This probably sounds overly dramatic to young people today, but you could get your assed kicked just for having hair that came over your ears. In the early seventies I was a regular customer at Mr. Lucky's, in Glendale, which had an upstairs room for Country, and a basement room for Rock. I was a basement kind of guy, in more ways than one. The problem was you had to walk in the front door of the upstairs area and hang a right to a ramp going downstairs. More often than not there were cowboys in that area waiting for a chance to get in a lick or two on a "Long Haired Commie." I never got accosted physically, but there were a few choice comments aimed my way.

Of course in the eighties cowboys started getting high and letting their hair grow, and the tension subsided a bit. It didn't hurt that two of the icons of Outlaw Country, Willie and Waylon, wore their hair long. Although it must be said that when I saw Waylon in 1967 at JD's In The River-bottom, he had slicked-back Nashville hair and he kept ribbing his drummer, who had a pudding bowl Beatle cut. Waylon smirked, more than once, that he and the other short-haired members of the band were going to take him outside and thrash him good.

All of this hair raising consciousness brings me back to Wild Bill. As I began to research the Old West seriously, I encountered a respected historian who was adamant that Wild Bill Hickok was gay because of his long hair. The historian was a World War II guy and he thought the mere fact that Hickok wore his hair "like a woman," was "proof" that Wild Bill was a homosexual.

This, of course, is downright ridiculous and silly beyond belief, but it just shows how much we judge the past by our current prejudices.

Hair Wars II
As Mark Twain allegedly put it: "History doesn't repeat itself, but it does rhyme. Got this from the Top Secret Writer:


"Long hair was a major statement in the 1860s-70s West as well. Long hair went out of style in the 1850s and was certainly done in for most folks during the Civil War (lice, grime). Westerners like Hickok and Cody wore their hair long as a statement that they were mimicking the old-style plainsman/mountain man. It was also a dare to their Indian opponents to come and try to take it. Santanta once taunted Sheridan by asking him to let his soldiers grow their hair long so his men could take worthy scalps. Sheridan said he couldn't cause the soldiers would get lice."
—Paul Andrew Hutton

Reporter: "How do you sleep with all that hair?"

George: "How do you sleep with your arms and legs attached."