September 21, 2017
Wild Bill Hickok and Buffalo Bill Cody were the rock stars of their day. Think Crosby, Stills & Nash, only this is Hickok, Cody & Omohundro. (Granted, it's a mouthful, but you get the picture) 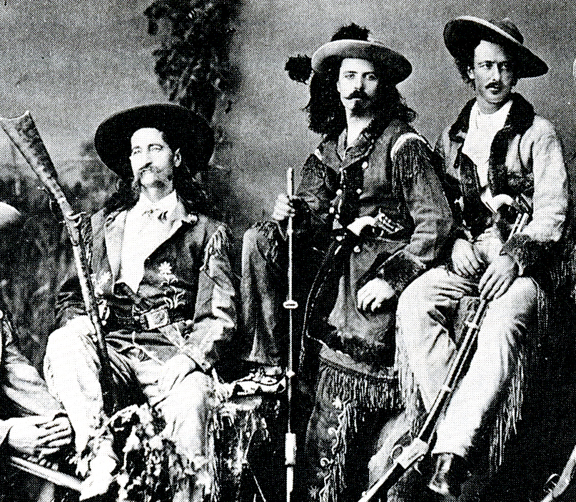 Seventies (that would be the 1870s) rock stars: Wild Bill, Buffalo Bill and Texas Jack
who tour under the name "The Combination" and perform all their classic hits.


Touring from town to town and flaunting their Western frontier manliness, "The Combination" attracted large crowds—and eager women—and they encountered all of the problems and side effects attendant to the latter day rock 'n' roll tour, including security issues. The only difference is, Cody and crew didn't have bodyguards or a security detail.

November 6, 1873
The Combination, featuring Buffalo Bill, Wild Bill and Texas Jack, appears for several nights at the Parshal Opera House in Titusville, Pennsylvania. The hotel manager where the cast is staying warns the troupe local toughs have made a vow to beat up these so-called "Scouts of the Plains." The actors are encouraged to use a side door to enter the hotel from the Opera House. This works for a couple nights until Wild Bill gets tired of the evasive action and seeks out the toughs, who he finds in a billiard hall nearby. One of the bad boys sneers, "Hello, Buffalo Bill! We have been looking for you all day."

"My name is not Buffalo Bill; you are mistaken in the man," Hickok replies.

"You are a liar!" comes the cocky reply. Hickok punches out the tough guy, then takes a chair to the rest, clearing the room. Hickok later informs Cody they will not have to be using the side door anymore.

Besides this kind of "frontier fun," Hickok is not happy. According to Cody, Wild Bill hates the fakery, is bored and deliberately upsets the "Indians" by discharging his pistols on stage, too close to the performer's legs, burning them with black powder, thus creating un-rehearsed yelps of pain and mad hopping, when they should be dying.

In 1911, Cody also had this to say about the reluctant thespian: "Wild Bill was a bad actor most anywhere, but he was an especially bad actor on the stage. Jack Omohundro, known as Texas Jack, was with the show, and when the curtain fell at the close of the first act he and I and Wild Bill were supposed to stand out near the front of the stage clasping rescued maidens to our breasts in the white glare of the calcium. but Wild Bill was never out there where he belonged. He invariably hung back in the shadows at the rear or remained half-hidden behind a painted tree or rock. He was a poor hand to pose or show off and hated to have a lot of people staring at him. One night when the spot light found him leaning against a gnarled oak in the background, it made him mad, and he took a shot at the spot light machine in the central aisle of the balcony, shattered the bull's eye and broke the machine. The show had to go on to the end without the usual calcium effects."

In another version of this story, Hickok gets blasted with the intense light and yells, "Turn the blamed thing off!" 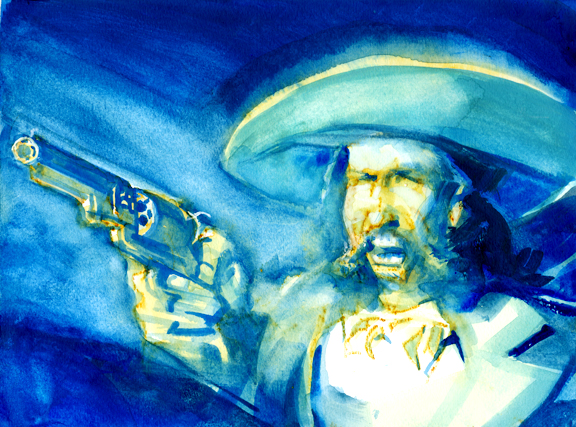 There were perhaps other reasons for Hickok's unhappiness. One of the troupe, Hiram Robbins, later reported on Wild Bill's "effeminate voice," saying, "Although [Hickok] was a large and powerful man, he had a voice like a girl, altogether too weak for the part which he would naturally take."

Others have claimed Wild Bill's drinking become a problem and he had to be shipped home. Another report, described Hickok's departure this way:

March 14, 1874
A reporter for the Rochester Democrat and Chronicle, spots Wild Bill "passing down State Street" while the troupe of scouts, including Cody and Texas Jack, he had been performing with have departed for Lockport. Approaching Hickok in the blowing snow, the scribe is greeted by the frontiersman with a firm handshake ("an iron vice from which we were glad to be released."). A newsboy standing nearby, an "impudent youngster," recognizes the famous Westerner and cries out, "Oh! Stag his nibs wid the long hair!" [translation: "Oh, look at that self-important man with the long hair." Or, the British version: "Oh, look at the fancy posh bloke with the long hair."] Moving away from the gathering crowd the reporter shadows Hickok and learns the following: "We were informed that Bill had received a call to the frontier. Recognized as one of the best scouts and Indian fighters that have appeared upon the great Western frontier, his services are highly valued and eagerly sought for when there is danger of war with the Red man. . .He will first proceed to New York where he has some business to transact, remain there a few days and then go direct to the frontier. . .We shook hands with the hero, bade him good-bye, and wished him a pleasant journey to his far western home. He left at 12:15 this morning for New York."

His time in New York is vague and unclear, although there are stories of heavy gambling and drinking—and heavy losses (Cody and Omohundro reportedly gave Hickok a parting gift of $500 and two .44-caliber Smith & Wesson "American" revolvers). One famous legend has him joining a rival show, and leaving and then hearing they had hired an actor to portray Wild Bill, so he returned and wrecked the set. Whatever the truth, Wild Bill was through with acting. He just wanted to return to the West he loved.

Special thanks to Mark Boardman, Gay Mathis and Micheal Bell for the translation on the "Stag his nibs" oath. Gay found an 1880 news article about backstage actor slang and apparently it means, "Look at him."

"The time to relax is when you don't have time for it."
—Sydney J. Harris
Posted by Bob Boze Bell at 2:50 PM